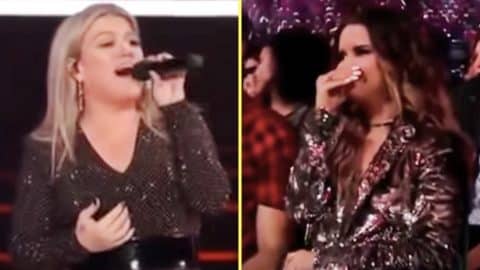 On Sunday, May 20, 2018, all eyes were on Kelly Clarkson. She was pulling double duties at the Billboard Music Awards as host and performer – and completely rocked it!

After an emotional tribute to the victims of the Santa Fe High School shooting, Clarkson turned the energy way up with an epic medley of several of 2017’s biggest hits. The songs included Sam Smith’s “Too Good At Goodbyes,” Kendrick Lamar’s “HUMBLE,” Imagine Dragon’s “Thunder,” Khalid’s “Young, Dumb and Broke,” Bruno Mars and Cardi B’s “Finesse (Remix),” Ed Sheeran’s “Shape of You,” Shawn Mendes’ “There’s Nothing Holdin’ Me Back,” and Taylor Swift’s “Look What You Made Me Do,” and Maren Morris‘ “My Church.”

As she sang each cover, the cameras panned to the song’s original artist, each more excited than the last that an artist of Clarkson’s caliber was performing their hit!

When it came to “My Church,” the cameras locked onto Morris and her husband, Ryan Hurd, who were both visibly freaking out! Morris put her hand on her chest and leaned her head back in disbelief that Clarkson was actually singing her song!

During Clarkson’s transition from “My Church” to “Too Good At Goodbyes,” she pointed at the country singer and said, “I love Maren!”

That moment made Morris freak out even more than she was before! She took to Twitter to write her feelings about first Billboard Award win and that Kelly Clarkson moment.

“BOKAY. Thank you @BBMAs for my first Billboard award + [Kelly Clarkson] for the epic shoutout,” she wrote.

Watch Clarkson’s full medley below – you won’t have to wait long for the Maren Morris freakout!