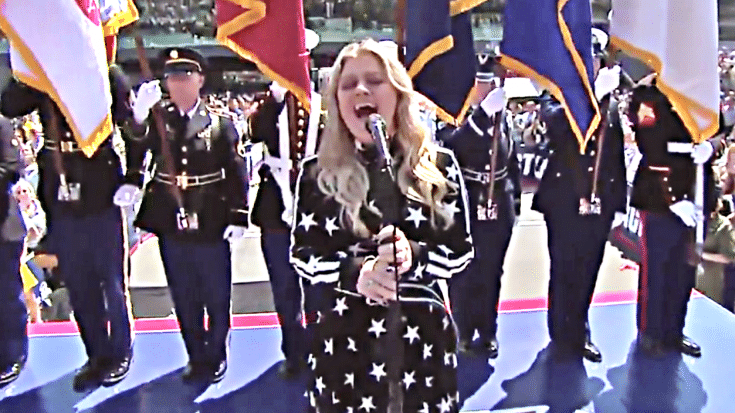 The internet was blowing up with praise and gratitude for one of the best performances of the national anthem we had ever seen!

Taking to the stage at the Indianapolis Motor Speedway in 2018 for the annual Indy 500 – Kelly Clarkson proved once again why she was chosen as an “American Idol.”

The 2018 Indy 500 had been on many race fans’ minds and at the forefront of sports news for a number of reasons. It will mark Danica Patrick’s first return to the IndyCar series since her exit in 2013 – and it will mark her last time behind the wheel of a race car. Additionally, two popular drivers – James Hinchcliffe and Pippa Mann – didn’t make the qualifying rounds and won’t be able to compete.

In a moment that many expected to be good – but even exceeded those expectations, Kelly Clarkson rang out across the loudspeakers with a national anthem performance that gave the entire crowd chills!

I nominate @kelly_clarkson for every national anthem ever from this day forward. #indianapolis500

Kelly Clarkson was the perfect choice for this year's #Indy500 national anthem! ? #ThisIsMay

One of the most important parts of any true sporting event in our great nation, performing the national anthem is a great honor for any singer and an even greater joy when they do as great a job as Kelly Clarkson did!

Not only was Clarkson there, but they had an incredible flyover by a B2 Stealth Bomber!

Very cool flyover of the B2 Stealth Bomber at the #Indy500 #indycar pic.twitter.com/xAAhHZ90V8

Watch the video below of her unforgettable national anthem performance during the opening of the 2018 Indy 500 – and let us know how you think she did!

THAT'S how you sing the National Anthem.