By Miranda Raye on November 7, 2018
Advertisement 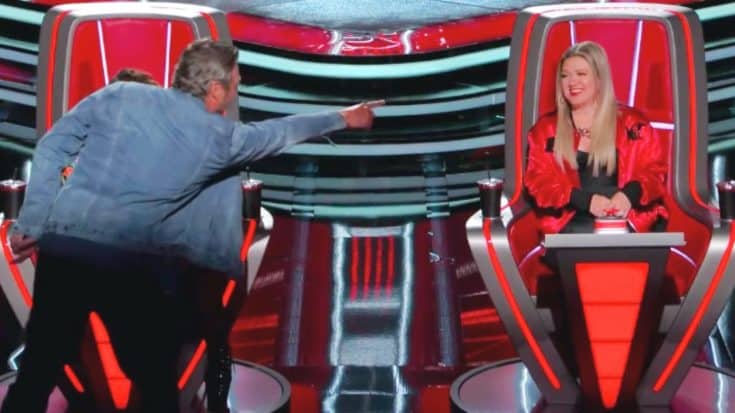 Kelly & Blake: The “Brother & Sister” Of The Voice

Kelly Clarkson and Blake Shelton go back a lot further than fans of The Voice may realize. The two have been friends for well over a decade.

So when Clarkson joined The Voice to coach for the first time during Season 14, it was a given that she was going to bring a new dynamic to the show. First just by being there, and second, because of her close connection to Shelton.

Sure enough, it didn’t take long for them to establish a bit of a sibling rivalry on the show.

At the start of the season, the two made a bet over who would win. If Clarkson won, she said that Shelton would have to call her “Queen Kelly” throughout the following season. But if Shelton won, he was going to make Clarkson “shut up for five minutes.”

As you can see, the two were already in full-on teasing mode that early in the season. Oh, and Clarkson won, so she made sure Shelton held to his side of the bargain throughout Season 15.

Season 15 Gets A Seating Change

It made matters even worse during Season 14 that Shelton and Clarkson sat directly next to each other on stage. Since they had no one to talk over, they could freely bicker with no problems!

As funny as the teasing was for viewers to watch during Season 14, Clarkson felt like she couldn’t take it a second time around. So that’s why she was overjoyed when the seating arrangement for Season 15 was changed to place her next to Levine and Jennifer Hudson, leaving a chair in the middle of her and Shelton.

It’s not that Clarkson dislikes Shelton, she was just relieved there was a bit of space between them so he couldn’t annoy her so much. This is something she admitted in a clip The Voice posted about the duo’s rivalry.

“I don’t want to sit next to Blake,” Clarkson can be heard telling Hudson during some downtime on set. “I’ve been with Blake for like over a decade. You’ve only had him for one season.”

They Really Do Love Each Other

But don’t get things twisted, no matter how much they fight and tease, the two truly do love one another.

“I actually love Blake,” Clarkson said in a behind-the-scenes interview. She then said that her all-time favorite thing about him is what ended up influencing her to become a coach in the first place.

One thing’s for certain, there will never be a dull moment on The Voice as long as Shelton and Clarkson are coaching together!

You can watch more hilarious moments from their rivalry by tuning in to the clip below.