By Jennifer Pernicano on December 5, 2018
Advertisement 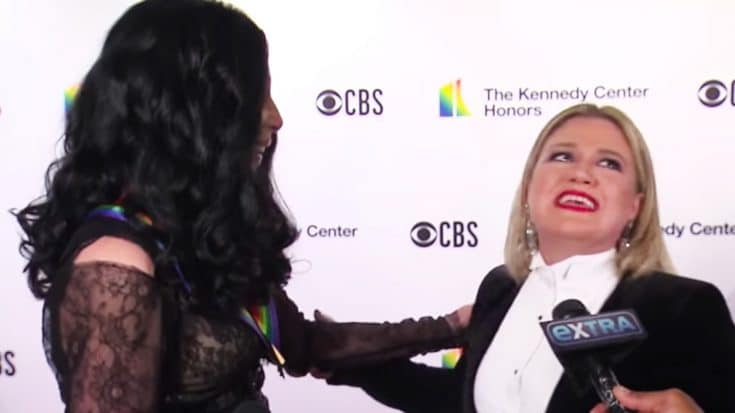 Just like us, superstars can get starstruck and nervous around other folks they’ve admired for years – and this is exactly what happened to Kelly Clarkson…but in a hysterical twist she lost her mind and we honestly can’t stop laughing!

In what was supposed to be a red carpet interview with Extra ahead of the 2019 Kennedy Center Honors, Voice coach and music superstar Clarkson heard Cher‘s distinct voice behind her and absolutely froze up – just able to squeak out a few words to the interviewer.

And that was only the beginning! Clarkson explained she’d never met Cher saying “Don’t do anything – I’ll get so nervous it’ll make me want to cry!”

The interviewer was surprised to hear that they’d never met – Clarkson adding that Cher is her favorite. “I came here to sing for Reba, but Cher is just an added bonus!”

Taking matters into his own hands, as Cher began to walk by, he stopped her and introduced the two to one another! It’s a moment Clarkson will surely never forget!

To her own surprise, Cher was ecstatic to meet her as well!

Watch this hysterical moment between Cher and Kelly Clarkson below – y’all will be HOWLING!