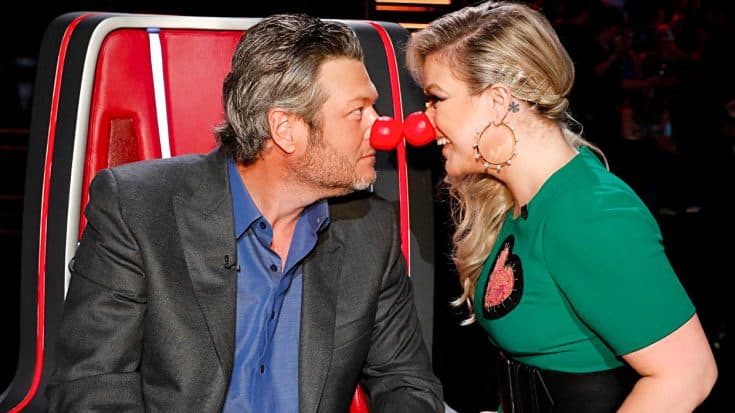 Aside from the insane talent that comes through each season on The Voice, it is the panel of coaches that keep the real fun alive. While all four coaches specialize in their own style of music and sound, one thing they certainly all love to share is laughs – usually at one another. While rehearsing for their latest show, one coach decided to play a little prank on her fellow buddy.

Season 16 of The Voice has brought in a handful of young talents and a brand new coach, John Legend. Right from the beginning, all four coaches found themselves fighting over contestants during the blind auditions. While steals and surprises unfolded, it ultimately ended with their teams coming together in perfect fashion. But of course, the playful pranking couldn’t stop there.

Kelly Clarkson decided to play a joke on fellow coach Blake Shelton behind the scenes.

Last season, Team Kelly took home the cake with her powerhouse winner, Chevel Shepherd. With two years of wins under her belt, she has no intentions of slowing down – or losing to anyone. So when she finally got ahold of her trophy, she wanted to make sure it was known who runs this competition.

Clarkson posted a video of her walking around backstage with her trophy, making her way over to Blake Shelton‘s trailer. As she walks over she jokes,

“I just thought, maybe Blake forgot. Maybe he forgot how awesome I am.” Clarkson laughs, “So I thought I’d leave it just right in his trailer.”

As Clarkson flips around the camera to show her beloved trophy sitting center stage in Shelton’s trailer, she makes a joke about where all his vodka is – specifically his brand, Smithworks. Not to worry, she found his stash within seconds.

After snooping a bit, Clarkson leaves her trophy there in hopes to get a good reaction out of Shelton.

All in good fun of course! These two have the best relationship!

A little gift for @blakeshelton First day back on set and I’m certain he’s been missing me…. #TheVoice #CrossBattles #Threepeat ???‍♀️❤️ pic.twitter.com/7qQ0sXA44X