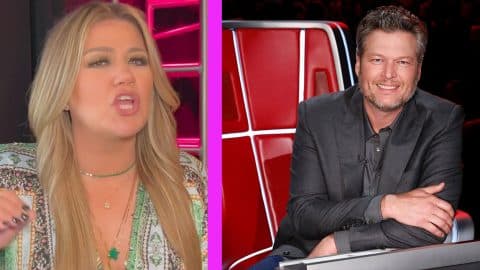 And the rivalry continues.

Kelly Clarkson and Blake Shelton have a long but friendly rivalry – especially when it comes to competing on The Voice. Since the two of them are both country artists, they tend to fight over the same contestants.

Most recently, Shelton told one contestant that Clarkson doesn’t even like country music while they were arguing, in hopes that they would choose his team. Clarkson started out in country music when she auditioned for American Idol, but she has been dabbling in other genres ever since. Shelton uses that as a way to get back at her sometimes while they coach on the competition show so she later took to Instagram to defend herself.

“Blake decided to, like, go really hard on me about how much I know next to nothing about country music,” Clarkson says in the video. “I’m close to being done fighting about it. You don’t own it!”

She adds, “I am allowed to love and appreciate and grow up on, by the way, I grew up three hours south of Blake Shelton. South! So, I’m like, more southern. I grew up with trucks and tailgates and doing those country things. I also grew up doing other things and liking other genres of music!”

Thank you for coming to my Ted Talk! Or should I say… my Blake Talk 😎 @BlakeShelton #TheVoice #TeamKelly #IKnowCountry pic.twitter.com/7XHnK9GMP5