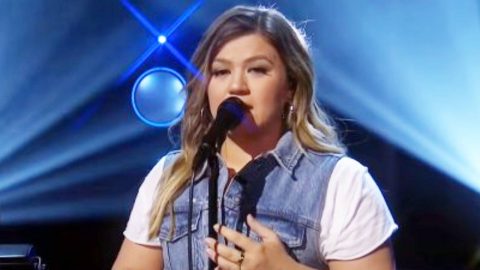 During her tenure as host of her own talk show, Kelly Clarkson has proved that she can sing just about anything. To kick off each episode, Clarkson performs a cover of a fan-requested song during a segment called “Kellyoke.”

She has performed every genre from country, pop, classic rock, R&B, and even hip-hop. Check out a few of her covers below.

It seems she can and will tackle any song thrown her way, but while filming the 20th season of The Voice, she revealed there is one song that she claims she will never sing. For the Battle Rounds, she enlisted the help of Luis Fonsi, one of the singers behind the mega-successful crossover song “Despacito.”

While they were in-between coaching singers, Clarkson made a revelation and had to tell her advisor.

She said, “I just realized something. You have the one song in history I’m afraid to cover: ‘Despacito.'”

She replied, “I have practiced so hard, because I love singing in Spanish as well, or just in different languages. And it’s, like, the biggest song of all time. You’re kind of like, ‘You know what? I’m gonna leave that alone.'”

In April 2020, Clarkson released her single “I Dare You” in Spanish, as well as many other different languages, so she wasn’t joking when she said she enjoyed singing in other languages!

But, even though she would do incredibly well singing “Despacito,” it seems she is too “afraid.”

Watch the clip of her telling Fonsi she won’t be covering his song, below.

Ok but how amazing would @KellyClarkson covering @LuisFonsi's #Despacito be? 😍 pic.twitter.com/nVrfNM6NWA