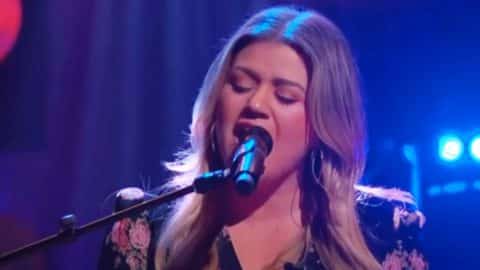 The “Kellyoke” portion of The Kelly Clarkson Show is a fan-favorite part of the show. Every week, viewers anxiously wait to see which songs Clarkson will pick to perform.

Clarkson doesn’t just stick to one genre. She covers pop, rock, and country, and sings both modern hits and timeless classics.

Oftentimes, Clarkson will perform songs that relate to the guests she has on the show. For example, when Shania Twain was a guest, Clarkson covered “Whose Bed Have Your Boots Been Under?”

So when Clarkson had viral TikTok sensation Nathan Apodaca as a guest on her show, she knew she had to cover the song that helped make him famous.

Apodaca became an overnight celebrity in 2020 after he posted a video of himself skateboarding while drinking cranberry juice straight out of the bottle and listening to Fleetwood Mac‘s “Dreams.” In an otherwise dark and dreary year, Apodaca’s video brought joy to millions of people across the globe.

Because of that one video, Apodaca was able to move out of the RV he was living in and put a down payment on a house. He told his story during a video interview with Clarkson.

Apodaca helped spark a renewed interest in “Dreams” 43 years after it was released.

The song reappeared on many music charts around the world and experienced its best streaming week in history. It was streamed over 8.47 million times in the U.S. alone for the week ending in October 1.

To honor Apodaca and his rise to fame, Clarkson decided to cover “Dreams” during “Kellyoke” that day. Her rendition is just as delightful as you’d expect it to be.

Tune in to the video below to see Clarkson offer up her take on “Dreams.” We love how this iconic Fleetwood Mac song is popular once more, and that it’s made many people smile in such trying times.