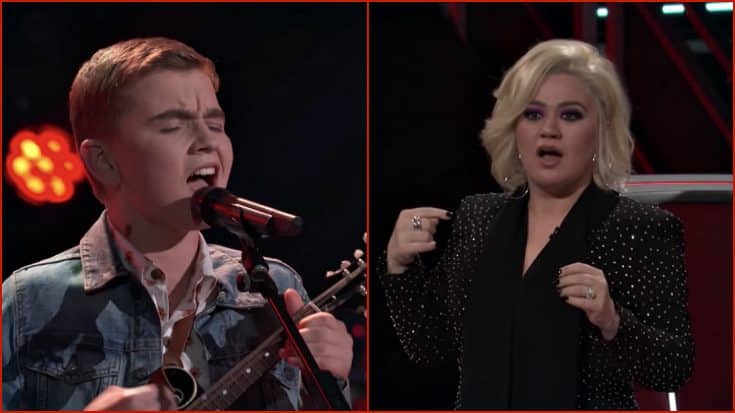 14-year-old Levi Watkins left quite an impression on the Voice judges during Season 18’s Blind Audition round. Blessed with a voice that belies his youth, Watkins wowed the judges with his rendition of  Train’s “Soul Sister.”

The teen strummed along on his mandolin while nailing the performance that had the judges singing along. But, only Blake Shelton turned his chair…a decision that the other judges regretted after seeing that the clear, powerful voice they had been listening to had come out of a 14-year-old’s mouth.

When Watkins finished his performance, Blake Shelton ran to the stage and celebrated. The other judges looked on dumbfounded. “For a billion dollars, I thought you were a female who sang lower, in your 20s. I kept waiting for ‘her’ to go higher,” Kelly Clarkson said.

“I am not an actor,” Blake Shelton said. “But, that is the greatest performance I ever gave in my life…to turn around and not react was the hardest thing I ever did.”

“I can’t believe you’re only 14, because that was an incredible vocal,” Shelton added before telling his fellow coaches that they had made the worst move of their Voice careers by not turning around.

Blake took to Twitter to pat himself on the back for securing the teen phenom for his team, saying: “And the first ever #hellright award for Best Actor goes to… ME! This award is dedicated to you Levi.”

And the first ever #hellright award for Best Actor goes to… ME! This award is dedicated to you Levi. WELCOME TO #TEAMBLAKE! #voicepremiere

Watch Levi Watkins’ Blind Audition in the video below.