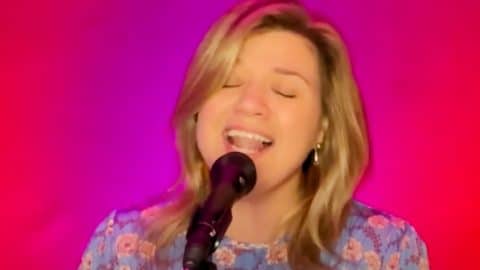 From country, to pop, to rock and roll, the “Kellyoke” segment of Kelly Clarkson‘s namesake talk show has featured a variety of genres. For one episode, Clarkson decided to shake things up again by sharing a little Motown music with her audience.

The song Clarkson performed was “I Can’t Help Myself,” also known as “Sugar Pie Honey Bunch.” Originally recorded by the Four Tops for the Motown label in 1965, the song is considered a staple piece of music history.

In 2004, Rolling Stone published its 500 Greatest Songs of All Time list. “Sugar Pie Honey Bunch” landed at the 415th position on that list.

Now, five decades after the Four Tops released their original recording, “Sugar Pie Honey Bunch” is one of the most recognizable songs out there. It has been covered dozens of times, with many covers being featured in commercials.

The song has also earned covers from famous singers such as Latoya Jackson, Madonna, and Kid Rock.

Clarkson kept pretty true to the song’s original style when she offered up her own take for “Kellyoke.”  She did make a few small changes, as her version is more upbeat and a bit poppier than the original.

These changes gave Clarkson’s cover a fun, bouncy feeling, and it looked like she was having a blast while singing the tune!

Check out the below video to see what Clarkson and her band did with this Motown classic.