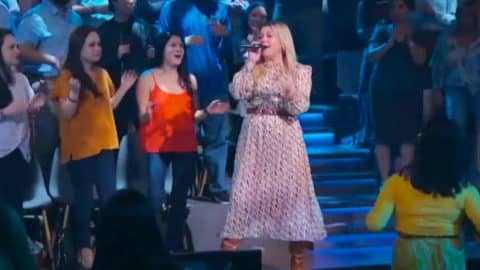 Before The Kelly Clarkson Show was forced to shut down production in March due to the world environment, Clarkson and her crew had pre-taped a full show that ended up on the back burner. That show didn’t see the light of day until June 1, 2020, when it finally aired.

Clarkson opened the show by addressing her audience from her cabin in Montana. She wanted to make everyone aware of the fact that the show they were about to watch was pre-taped in February, which is why it was held in the studio with an audience and celebrity guests.

After Clarkson’s brief address, the pre-taped portion of the show kicked off with a musical performance. During each show, Clarkson will cover another artist’s song during this musical segment, which she calls “Kellyoke.”

She has often performed country songs, including tunes by Garth Brooks, Reba McEntire, and Carrie Underwood.

For this particular episode, Clarkson chose to embrace the summer season by performing a cover of Little Big Town’s fun-loving single, “Pontoon.”

“Pontoon” was released as the first single off of Little Big Town‘s album Tornado. The song, which is all about relaxing out on the water and having a good time, was appropriately released at the tail end of April 2012, just as the weather started warming up.

Country fans adopted the song as their summer jam that year, and sent it to the #1 spot on the Hot Country Songs chart. It also crossed over to claim the 22nd spot on the all-genre Billboard Hot 100 chart.

All of these years later, “Pontoon” is still a song country fans love to listen to when they want to forget about all of their worries and just have a little fun. So it makes sense why it was one of Clarkson’s go-to choices when selecting songs for her “Kellyoke” segment.

Clarkson delivered a spunky cover of the song that had the audience on their feet and clapping along. But she also took a few liberties with the track to show off her powerhouse vocals, and those moments pack a punch!

Tune in to the clip below to watch Clarkson’s “Kellyoke” performance of “Pontoon.” This rendition of the song just landed into our summertime playlist, how about y’all?