By Miranda Raye on October 31, 2018
Advertisement 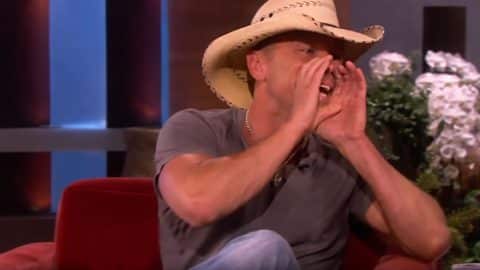 Several years back, country superstar Kenny Chesney graced The Ellen Show with his coy smile, lovable personality, and an unexpected dirty joke that had the live audience in a roar of laughter!

After a handful of sweet compliments for Chesney, host Ellen DeGeneres told the singer that she was informed he had a joke he was eager to share with the show!

“I do have a joke,” the singer admitted, prompting DeGeneres to encourage him to go ahead.

Chesney began to tell a story of an elderly couple making their drive back home from their winter vacation in Florida.

A Story With A Hilarious End

As they continued along with their drive, they are unexpectedly pulled over by a cop who immediately asks to see the man’s driver’s license.

Because of their old age, the couple has a hard time hearing one another, forcing them to cup their hands around their mouths and yell to one another in order to be properly heard.

After a moment of bickering between the couple, the cop notices the man’s license was issued in Missouri. He then makes an embarrassing confession to the man. “I mean no disrespect, sir, but I had the worst sex I’ve ever had in my life in the state of Missouri,” he said.

The joke takes an epic turn, causing the audience burst into laughter at the unexpected ending!

Y’all know that you have to hear the punchline now. So be sure to tune in to the video below to know how the story ends.

Who had any clue that Chesney is such a comedian?