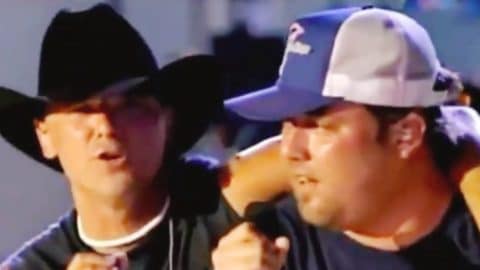 Every now and then, an artist one wouldn’t traditionally label as “country” finds themselves a member of the country music community.

Take Kid Rock as an example, a former rapper turned country star thanks to hit songs such as “Picture” with Sheryl Crow and “All Summer Long.”

Another such artist would be Uncle Kracker, who most people think of as a rock star. But much like Kid Rock, who he happened to be good friends with, Kracker has found himself a welcomed member of the country music community.

Kracker’s main introduction to country fans came in the form of his 2004 duet with Kenny Chesney, “When the Sun Goes Down.”

How Uncle Kracker Came Into The Country Scene

The song reached the first spot on the Billboard Hot Country Songs chart, and hit the fourth spot on the year-end chart.

Today, you can still hear “When the Sun Goes Down” playing through speakers at pool parties all over the country.

“When the Sun Goes Down” isn’t the only song that Kracker and Chesney have ever performed together. Around the same time, the duo got together at one of Chesney’s shows for a live duet on Kracker’s well-known hit “Drift Away.”

Even if you’ve never heard Kracker’s version, you’ve likely heard “Drift Away” before. It was originally recorded by John Henry Kutz for his 1972 album Reunion. The following year it was recorded by soul singer Dobie Gray, and it became the biggest hit of his career.

Jump to 2003, when Kracker recorded his own rendition of the song. His recording also featured Gray, and together the two of them took the song to the top spot of the Adult Contemporary chart, where it remained for a record-breaking 28 weeks.

Uniting For Another Duet

So you can imagine how thrilled Chesney’s past Knoxville audience was when Kracker came strolling out on stage and started to sing “Drift Away.” Chesney joined in on the performance, as did everyone else in the stadium.

Seriously, it seemed as though every person in the audience was singing along with Kracker and Chesney that day. We bet you would have been hard-pressed to find someone in the crowd that didn’t know the words to the song!

Since we’re sure y’all love “Drift Away” just as much as Chesney’s Knoxville crowd, go ahead and tune in to his throwback duet with Kracker below. Don’t be surprised when you find yourself singing along as well.