By Manly Bryant on May 9, 2022
Advertisement 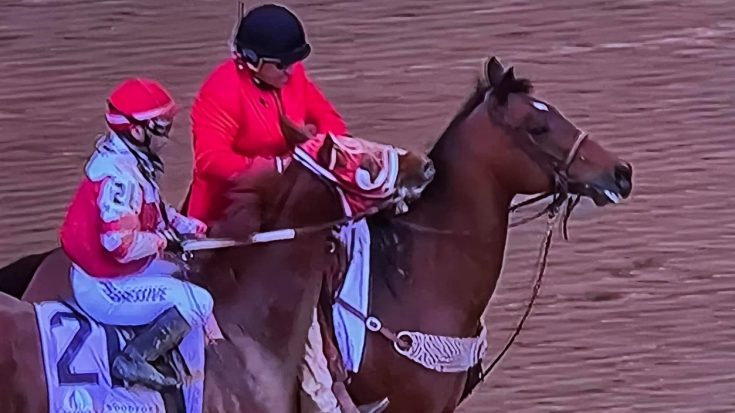 Rich Strike the racehorse is not only going down for coming out of nowhere and winning the Kentucky Derby, but for also trying to gnaw on the other horses after securing his victory.

The derby went down on Saturday, attracting many A-list celebrities and heavy gamblers who were betting on their favorite horses, with many people betting on fan favorites, like Epicenter.

Rich Strike was certainly not the favorite but an underdog with nearly a 100-to-1 shot of winning when he showed up to the race with a late entry and was placed at the farthest starter gate on the outside of the track.

Even with all the obstacles, Rich Strike struck riches for his owners, trainer, and jockey when he blasted past all the other horses, took the lead, and won the race, creating what’s being called one of the greatest upsets in horseracing history.

Newsweek reported it being called, “The greatest two minutes of sports.”

After winning, Rich Strike was galloping down the track with the other horses cooling off when he got agitated and began nipping at another horse walking next to him.

The other horse’s owner, in an attempt to get Rich Strike to stop, began pushing, elbowing, and punching him to get him off.

Rich Strike wins the Derby and immediately starts trying to eat the other horses. pic.twitter.com/hFJ5jOy1z4

One person commented on the Twitter video, “People who have spent time around horses understand this. You aren’t going to injure a 1000 lb animal by punching it. I have punched our horses in the nose when they are pushy and I could possibly be hurt. They are fine. They bite asserting dominance.”

Another said, “He wanted to run another mile, this was a warmup!”

A third said,“That horse is jacked up on Mountain Dew and Red Bull!”

Watch The Full Race Below