By Megan Dinsdale on July 12, 2019
Advertisement 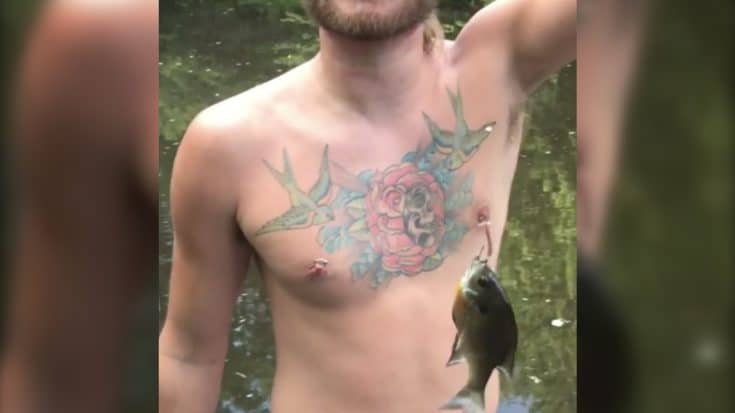 This could be the only fisherman in history to catch a fish using his nipple.

Brandon Jackson of Bullitt County, Kentucky made history last year by catching a bluegill fish using bait, line and nipple. The sound of using your nipple to catch a fish is cringeworthy. Somehow, someway he successfully caught himself a fish in under one minute.

Fortunately for us Brandon and his friends captured it all on film. In the video below you can hear his friend asking him to show the camera audience his fishing setup. Brandon gives a tug on his nipple ring with about 3 feet of fishing line attached to it with a hook and worm at the end.

“A little nipple fishin’. Right there, there we go. Let’s see what we got”. – Brandon Jackson

Within seconds of putting the bait into the water we see a fish jump.

After showing the cameraman Conner Martin his fishing setup, Brandon turns around and lays down on the edge of the dock. Within SECONDS you can see a fish jump out of the water going after the bait! Brandon, absolutely taken by surprise, stands up and you can amazingly see a bluegill fish flopping back and forth hooked on his line.

“Oh, my God!!! That was easy.” Conner exclaimed

Both Brandon and Conner are flabbergasted and can barely control their excitement of the unlikely catch. The camera zooms in and you can see the fish bouncing up and down tugging on his nipple ring. All we can imagine is how imminently close he is to losing a nipple. Fortunately for Brandon he didn’t catch a larger fish!