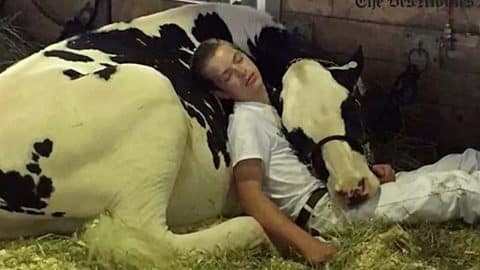 15-year-old Mitchell Miner and his cow Audri were participating in the Iowa State Fair’s youth dairy cattle contest when a heartwarming picture was captured of the two and it went viral.

They had been preparing for the contest for two months straight spending every day together. Mitchell would lead, bath, clip and walk her morning, noon, and night sticking to a strict schedule. Sometimes they were getting up as early as 3am to start training and spending so much time together they began to build a special bond. Unfortunately, Audri and Mitchell came in fifth place out of seven contestants and went home to prepare for the next contest.

The next morning they got up early again and got started, but after multiple days in a row of barely any sleep, they were still extremely exhausted. So they decided to sit down for a quick rest and it didn’t take them long to pass out leaning up against each other. Mitchell’s father walked into the barn and saw them sleeping, smiled and took a picture of the two. He later posted the picture to his Facebook saying a few wholesome words.

“Our son Mitchell and his heifer after showing yesterday.” Mitchell’s father’s said, according to Light Workers.

Audri was a borrowed cow so they had to give her back to the dairy farm in Blairstown, where she came from, after her final show.

Iowa boy and his heifer nap together at Iowa State Fair

Mitchell Miner and his heifer, Audri, have spent nearly every day together for the past two months. Learn more about their special bond here: http://dmreg.co/2wYr2gh

Posted by The Des Moines Register on Tuesday, August 15, 2017