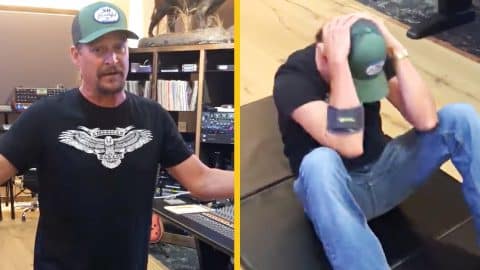 Kid Rock has officially accepted the 22 for 22 challenge to help raise awareness for a significant cause.

The 22 for 22 challenge is an awareness campaign designed to educate social media users on the alarmingly high suicide rate among veterans and active military. The challenge’s objective is to do 22 push-ups for 22 days and share participation on social media platforms. On Facebook, Rock wrote:

“Monday March 29th marks the start of an effort to end a national tragedy. U.S Veterans and Active Duty Service Members are committing suicide at an alarming rate, way out of proportion with the U.S population, on average 22 per day. It has to stop! To bring awareness to the crisis we are kicking off the #22for22Challenge, a social media effort to spread the word. We are asking participants to do 22 push-ups representing each life lost, each family left behind daily.”

Rock also expressed that part of the challenge’s goal was to “compel participants to donate funds to two organizations already involved in the mission and assisting families of the fallen.” In the video, Rock shared that he would be accepting the challenge, but due to an injury, the singer would be making a minor change. Instead of push-ups, Rock dedicated himself to 22 sit ups.

“Grandpa here has a little tennis elbow from playing too much pickleball, so I’m going to be rocking sit ups,” Rock explained.

For more on the 22 for 22 challenge, check out the following clip.