By Jennifer Pernicano on January 14, 2019
Advertisement 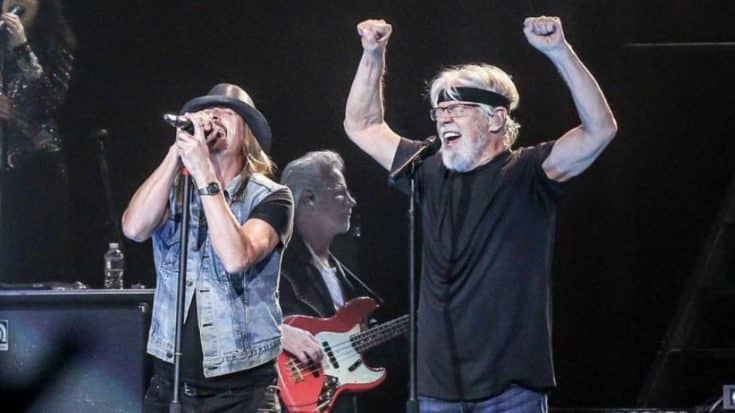 On January 11, 2019, Nashville’s Bridgestone Arena was jam-packed with some of Bob Seger‘s biggest fans. The legendary rocker and his Silver Bullet Band played his hits ranging from “Old Time Rock & Roll” to “You’ll Accomp’ny Me” and everything in between.

After his 18-song set, the crowd wouldn’t settle down, so Seger treated them to not one, but two encores – one of which featured a surprise guest.

“Well folks, I’m gonna bring out one of my good friends, a very good friend,” Seger told the audience. “I’ve known him since he started in music, Kid Rock!”

The crowd erupted in cheer as Rock came out and the two embraced each other before belting out the final song of the night.

Rock took the mic to tell everyone that it was “an honor to be here tonight, joining my friend and absolute musical hero here… Over 50 years, one of the best singer-songwriters in American history. Maybe his last time in Nashville. I sure hope not.”

Together, the singers performed Seger’s song “Rock N’ Roll Never Forgets.” Over 40 years after the 73-year-old rocker released it on his 1976 album Night Moves, the song – and Seger – rocks just as hard.

What a night in Nashville!! Thanks @kidrock for coming out

If you thought this pairing was a bit odd, it’s not! Seger and Rock go back many years, like Seger told the crowd. In fact, they are so close, Kid Rock was not only in attendance at Seger’s 2004 Rock and Roll Hall of Fame Induction Ceremony, he was the one to induct him!

They have lots in common, including both hailing from Detroit and having strong ties to Nashville, which made this appearance make a lot more sense. Kid Rock lives in Music City now and Seger records a great deal of his music in the bustling town.

Wearing his signature headband, Seger counted in his Silver Bullet Band, who have been performing with him since 1973, to kick off a performance no one will ever forget. Seger and Rock traded off lyrics in the first verse and harmonized during the rockin’ chorus.