By Miranda Raye on September 17, 2018
Advertisement 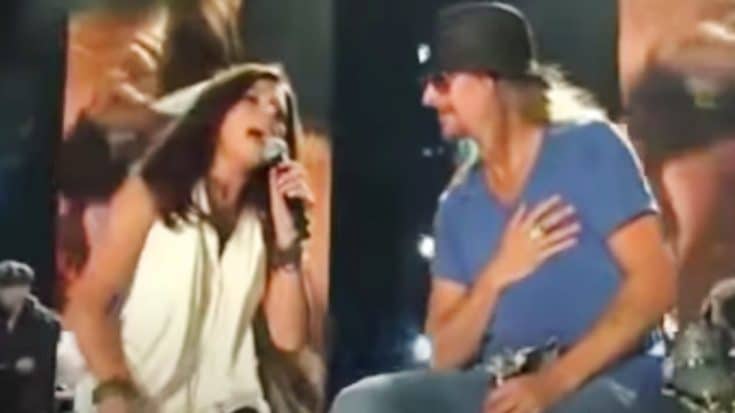 Kid Rock has a nice collection of hit songs to his name, but one of his most recognizable is his 2002 single “Picture.”

What few people know is that Rock experienced a major conflict over the song prior to its release. Originally, Rock recorded the song as a duet with Sheryl Crow, but Crow’s label didn’t give Rock permission to release the recording.

As a replacement, Rock had country singer Allison Moorer record Crow’s parts to the song, and she was the featured artist on the official version of “Picture.”

Still, many radio stations chose to play Crow’s version of the song, and so audiences got used to hearing Rock perform “Picture” with different duet partners.

Over the years, Rock would team up with many other notable female country singers for a duet of “Picture,” including Miranda Lambert and LeAnn Rimes.

Bringing In A New Voice

Another female country artist that Rock famously collaborated with on “Picture” was Martina McBride, who performed the song with Rock at the CMA Music Fest in 2009.

Rock started off the performance sitting on a stool, and as he finished singing his part of the song we’re sure the crowd wondered who was going to join him on the empty stool by his side.

Once he finished singing his part of the song, Rock answered the crowd’s question, saying:

Get Ready To Be Blown Away

McBride walked out on stage to a roar of applause, and took a seat to join Rock in an intimate performance of his hit song. The whole crowd and Rock were blown away by McBride’s voice, with Rock placing his hand over his heart multiple times while she sang.

If you thought that McBride and Rock’s “Picture” duet was great, listen to him sing the same song with Miranda Lambert and her group, the Pistol Annies, in the clip below.

Just goes to show that “Picture” is a great song no matter who’s singing along with Rock!