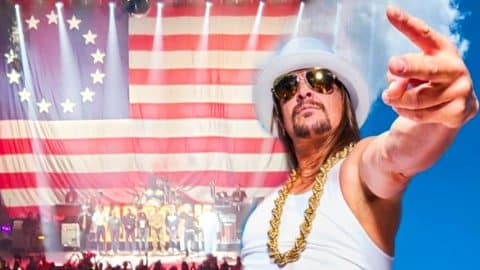 This past weekend, Kid Rock kicked off his 4-night run at DTE Energy Music Theatre in Clarkston, Michigan, which is about 40 miles outside of his hometown of Detroit.

During his Friday night (Sep 6) show, he paid tribute to the military, like he does often. But this time, the American flag he flew behind him did not display 50 stars – it had 13, which is known as the Betsy Ross flag.

The Betsy Ross flag is an early design of the American flag, which has 13 red and white stripes as well as 13 stars in a circle representing the 13 colonies. It is named after upholsterer and flag maker Betsy Ross.

Just a couple months ago, Nike decided to cancel the release of their July 4 shoe, which depicted the Betsy Ross flag. Controversial athlete Colin Kaepernick convinced them it was offensive.

Independence day Air Max 1 with the Betsy Ross flag on the back is nice. pic.twitter.com/lrhUOwfBtD

The reason a Nike spokeswoman told The Wall Street Journal that the company “has chosen not to release the Air Max 1 Quick Strike Fourth of July as it featured the old version of the American flag” is because of former NFL player Colin Kaepernick.

The Journal reports, “After images of the shoe were posted online, Mr. Kaepernick, a Nike endorser, reached out to company officials saying that he and others felt the Betsy Ross flag is an offensive symbol because of its connection to an era of slavery.”

Kaepernick, who famously took a knee during the National Anthem beginning in 2016 to protest police brutality, is a spokesperson for Nike, appearing in “Just Do It” campaigns last year.

Kid Rock is outspoken about his distaste for the former NFL star, stopping multiple concerts to tell his fans, “F*** Colin Kaepernick!”

While we aren’t entirely sure this was the reason why Kid Rock chose to display the Betsy Ross flag, you can watch him tell off the former football player below.