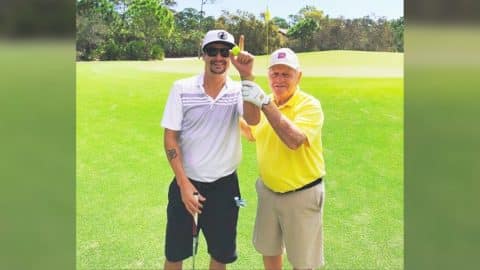 While country artists are singers by trade, many also have a passion for sports.

Many artists, such as Garth Brooks and Tim McGraw, grew up playing football. Others, such as Scotty McCreery, love baseball (in fact, McCreery even wrote a blog for the MLB a few years back).

But the most popular sport among country artists isn’t football or baseball. It’s actually golf!

A number of country singers find themselves at home on a golf course, including Vince Gill, George Strait, and Toby Keith. In Keith’s case, his love of golf inspired a song that fans get a kick out of every time he plays it.

Another singer who often trades in a microphone for a golf club is Kid Rock. While Rock didn’t start out country, he found himself at home in the genre after singles such as “Picture” and “All Summer Long” were hits on country radio.

Now, Rock identifies with the country music community perhaps more than any other. His latest record, titled Sweet Southern Sugar, is full of odes to country and redneck life, including songs titled “Po-Dunk” and “Tennessee Mountain Top.”

We’re sure Rock felt like he was on top of a mountain after he accomplished a huge feat while golfing on Saturday (March 2).

Although Rock has been an avid golfer for some time now, he had never managed to score a hole in one. That all changed during his recent golf outing, when he finally sent the golf ball straight into the hole on just a single swing.

It Gets Even Better…

As if that wasn’t exciting enough, Rock had an even bigger reason to celebrate. He scored his first-ever hole in one in front of a certified golf legend…Jack Nicklaus.

Over the course of his career, which spanned over 25+ years, Nicklaus managed to win 18 major championships. Because of this, many golfers and golf fans consider Nicklaus to be the greatest golfer in history.

The excitement of scoring his first hole in one in front of such a legendary figure was not lost on Rock. He shared a celebratory photo of him and Nicklaus together on Instagram, writing, “What’s better than your first hole in one? Celebrating with Jack Nicklaus!!!!”

What’s better than your first hole in one? Celebrating with Jack Nicklaus!!!!

Nicklaus celebrated with him, taking to Twitter to share video proof of his accomplishment. The short clip shows Rock going to retrieve his ball after scoring his hole in one, seeming quite proud of himself.

Once Rock digs the ball out, he turns to the camera with a huge smile and holds up the number one. He was probably on cloud nine in that moment!

Head below so you can check out the video Nicklaus. Congratulations to Rock on his huge achievement!

First hole-in-one for Bob Ritchie (a.k.a. @KidRock) Aced No. 2 at The Bear’s Club, 175 yards. Glad I slipped in some golf before settling in for some @TheHondaClassic action. Bob, the locker room thanks you for the free beverages! 😉 pic.twitter.com/VSwTpFYFuX