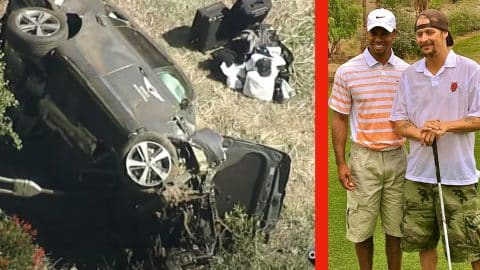 Just a day after the news broke that legendary golfer Tiger Woods had been involved in a very serious car accident in an upscale LA neighborhood, fellow golf aficionado and musician Kid Rock shared some well wishes for his friend.

Tiger Woods was the only occupant in a single-car accident that occurred just after the seven o’clock hour and was transported to a nearby hospital after rescuers were able to free him.

The Los Angeles County Sheriff’s Department said that the vehicle sustained “major damage” and Woods was freed from the wreckage.

This morning @LMTLASD responded to a roll-over collision in which @TigerWoods was injured. Please see our statement… pic.twitter.com/cSWOxKZC1w

Woods was recovering from back surgery he had on December 23, 2020. This was his fifth spinal surgery after the first fusion he underwent in 2017.

His agent released a statement following the crash stating that the PGA legend was in surgery after suffering multiple leg injuries.

CBS Los Angeles’ Sports Director Jim Hill says that prior to the accident Woods was shooting a documentary for Golf Digest with Dwyane Wade and David Spade.

After learning of Woods’ accident and ordeal the day prior, Kid Rock shared a statement to his social media expressing his deep concern for the golfer’s health and sending love.

The two have been friends for many years and Kid Rock even shared a photo with Tiger Woods during a golf event in 2013.