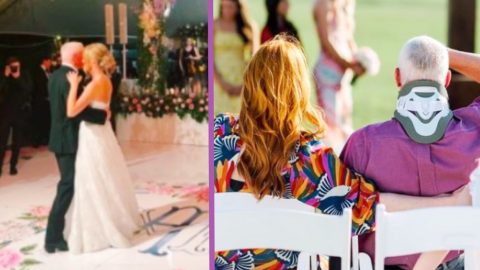 The past few months have been quite eventful for “Pioneer Woman” Ree Drummond…and not always in a good way.

On March 10, Ree’s husband, Ladd, and nephew, Caleb, were involved in an accident while fighting a fire on the family’s Oklahoma ranch. The trucks they were driving collided head-on.

Caleb was taken to the hospital and was reported to be in critical condition. Although Ladd refused treatment at the scene, he later drove himself to the hospital.

While there, Ladd learned he broke his neck in two spots. In an update on her Pioneer Woman website, Ree said “one of the two fractures was very close to being catastrophic.”

Both Caleb and Ladd were eventually released from the hospital. Ladd’s recovery has been going well, other than the fact he was recently kicked in the head by a cow (he’s ok!)

Ladd has been wearing a neck brace for the past two months while his injury heals. The hope was that he’d be able to take it off to walk his daughter, Alex, down the aisle at her May 1 wedding.

Although Ladd was still wearing his neck brace on the day of Alex’s wedding rehearsal, he was able to take it off for the ceremony. He also ditched his neck brace for his and Alex’s father-daughter dance during the reception.

Alex picked an emotional country hit for her and Ladd’s father-daughter dance. The song she chose was “Cowgirls Don’t Cry” by Brooks & Dunn and Reba McEntire.

Alex spoke about the reason why she picked that song for her and Ladd’s special dance at the reception:

“It’s a country song that we always listen to, it’s about a girl who grew up in the country, and I just feel like it was very fitting for my relationship with my dad,” she said.

However, Alex knew they’d have to put a little twist on the song. They used “more of an acoustic soft version” and also took out the verse about the cowgirl’s unfaithful husband.

“There’s a verse in it that talks about the dad comforting his daughter after a divorce or something, so we thought that verse wasn’t very fitting for this wedding,” Alex said with a laugh.

With those changes, we think Alex picked the perfect song for her and Ladd’s father-daughter dance. It’s sure to be a moment they’ll treasure forever.