By Manly Bryant on January 6, 2021
Advertisement 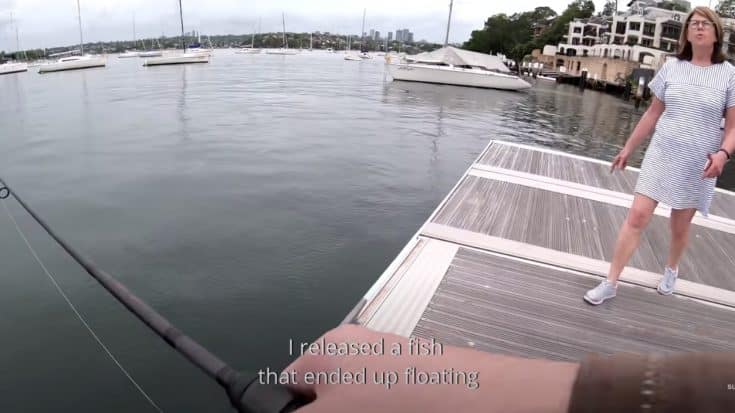 YouTuber who goes by the name Shroom filmed a video of himself getting approached by a lady who was not happy with him catching and releasing a fish.

The YouTuber was fishing on a dock located in Sydney, Australia, and had apparently caught the fish and when he released it, moments later, the fish began to float up to the top of the water. The lady saw it and immediately walked down to the water to confront him about it.

She said in the YouTube video below, “Why did you just kill that fish and throw it back in and kill it?”

Shroom replied back saying that he “didn’t kill it,” and she responded back with “You did so; I saw it, and it’s floating here.” Shroom then went on to tell her that he tried to release it from the hook but was having trouble with it. He was able to release it, however, and put it back into the water.

The fish ended up floating and the lady was not happy about it. She then asked to see his fishing license while she held up her phone to film him. He responded back that he had his license on him and that he’s filming her as well to put on his YouTube channel.

“I’ve done absolutely nothing wrong. I know my rules,” Shroom said. “Call the DPI now if you want, the Department of Primary Industries, you can give them a call.”

She walked off saying that she’s calling the DPI and also calling the Balmain Police Department. He told her she could call them both and casted his line back into the water. According to laws in Australia, the technique of catch-and-release is legal, however, is controversial and frowned upon by some people in the community due to it being deemed as cruel.

People who commented on Shroom’s YouTube video said, “Don’t understand what she’s trying to achieve… She’s gonna call the police & say ‘old mate was fishing & he released the fish but it died?!’ Cops will laugh at her.”