Largest Alligator In The U.S. Escaped After Tropical Storm Imelda 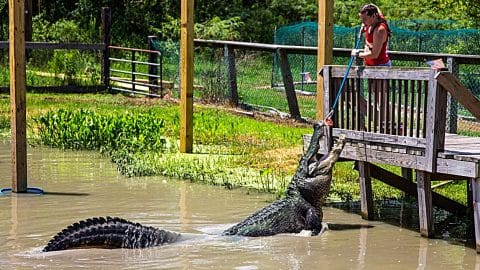 The largest alligator in the United States, named Big Tex, lives in Beaumont, Texas and ever since the Tropical Storm Imelda flooded the area the gator hasn’t been seen.

Severe flooding continues around Beaumont, Texas this morning;a flash flood emergency remains in effect. This is due to the remnants of Tropical Storm Imelda…

The storm swamped many parts of Southeast Texas with more than 40 inches of rainfall starting on September 17th and didn’t end until September 21st. The park where Big Tex lives is called Gator Country and it received a whopping 43 inches of rain.

“It was worse than Harvey for us,” Gator Country owner Gary Saurage said. “We did this almost exactly two years ago to this date. The water was higher (in Imelda) than it was the last time.”

😁 😎 BEFORE YOU GO THINKING IT'S FAKE NEWS…LOL CHECK THIS OUT…https://fxn.ws/2Mmc6jTMakenzie Noland celebrated her…

Big Tex is 13 feet and 8.5 inches long and weighs a hefty 1,000+ pounds. He lives inside the 21-acre Gator Country park and is now one of 40 missing alligators since Imelda hit.

Even though he is a massive reptile he’s well known for being extremely tame and expressing protective behaviors towards his trainers, according to Jonathan Warner, the alligator program leader for the Texas Parks and Wildlife Department.

He was caught in 2016 after game wardens were notified people were feeding him at a boat ramp and they feared he’d become a nuisance and danger to humans. So they trapped him and brought him to Gator Country.

Me and BIG TEX! He is the largest alligator ever caught alive in the United States. Y'all please say good morning and where you live Love y'all.

In only three years he quickly became incredibly famous, attracting people from all over who found out he’s the biggest gator ever captured alive in the United States.

“That is a world record,” Gary says. “That is the largest alligator ever captured alive in the United States. Everybody says we need to get that alligator back because they love him.”

He could just be hiding in his den and the water is still too high to know for certain but if he is missing they are afraid someone may hurt or kill him. They ask if anyone sees him please call Gator Country.

“I expect him to pop up as these waters drop and we’ll have a happy ending,” Warner said. “They’re homebodies when it comes to where they’re at. They really don’t spread far, especially bigger ones.”

We hope they find Big Tex soon! In the meantime, check out this YouTube video below about a Texas inter-student taking her graduation picture with the big fella.