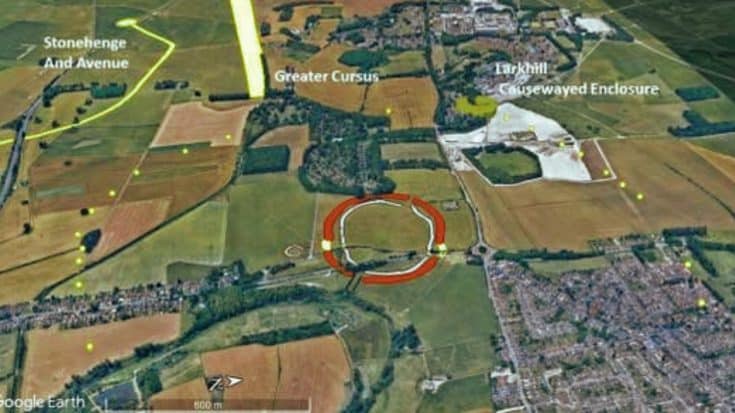 Archaeologists say they have recently discovered the largest prehistoric structure ever found in Britain and it’s near Stonehenge.

MSN reported the leading archaeologist on the project, Professor Vincent Gaffney saying, “This is an unprecedented find of major significance within the UK. Key researchers on Stonehenge and its landscape have been taken aback by the scale of the structure and the fact that it hadn’t been discovered until now so close to Stonehenge.”

Internet Archaeology published a paper on June 21st, 2020, detailing a full report on the structure that consists of 20 large holes in the ground that each measure 15 deep and are 60 feet across.

The holes are at an average 2837 feet away from the center of Durrington Walls, which is one of Britain’s largest henge monuments. The circle of holes stretch 1.2 miles around the Durrington Walls. You can see what that looks like in the image below.

The holes have always been thought to be sinkholes or small ponds, but after researchers used ground-penetrating technology and did magnetic surveying of the land, they realized the holes were not random holes but sacred Neolithic structures.

“I can’t emphasise enough the effort that would have gone in to digging such large shafts with tools of stone, wood and bone,” Professor Gaffney told MSN.

The holes were dug more than 4500 years ago and are located 1.9 miles north-east of Stonehenge on Salisbury Plain, near Amesbury, Wiltshire. Take a look at the video below to hear more details.