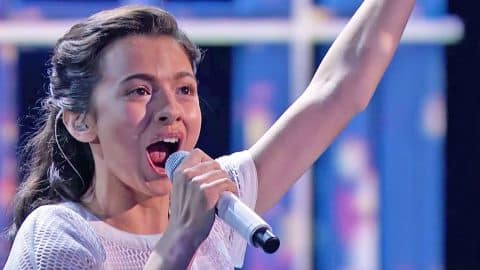 Meet A Tiny Singer With A Huge Voice

As America’s Got Talent said on its YouTube channel, Laura Bretan is “the small singer” with a “big voice.” That description couldn’t be any more accurate, since when you look at the young teen you’d never imagine the vocal power she possesses.

Bretan captivated the AGT judges and America early on in the competition with her soaring opera performances. One standout moment was when she sang “The Prayer,” a song most well-known as a duet between Celine Dion and Andrea Bocelli.

Proving Why She Was In The Finals

Due to her immense talent, Bretan made it all the way into the finals on the show. When it came time for her to perform Bretan proved exactly why she had made it that far in the competition.

Bretan sang the beautiful song “O Mio Babbino Caro,” which is from the 1918 opera, Gianni Schicchi. She literally dazzled on stage as she sang, because she was wearing a special white dress that allowed images of twinkling lights to be projected on to it.

You’ll Be Left In Awe

Her vocal performance was even more stunning. Although Bretan sang the song in Italian, she did such a wonderful job at portraying the emotions behind each word that you don’t even really need to know what they mean.

Bretan’s range is also something worth noting, since she can hit low notes and high notes with an equal amount of ease. At the end of the performance, she allowed her voice to soar and hit one long, powerful note that brought the room to its feet.

All of the judges showered Bretan with praise, especially Simon Cowell, who called her “extraordinarily talented” and complimented the amount of passion she poured into her performance.

We’d have to agree with Cowell on this one, Bretan is one talented young lady! See and hear for yourself in the clip below.