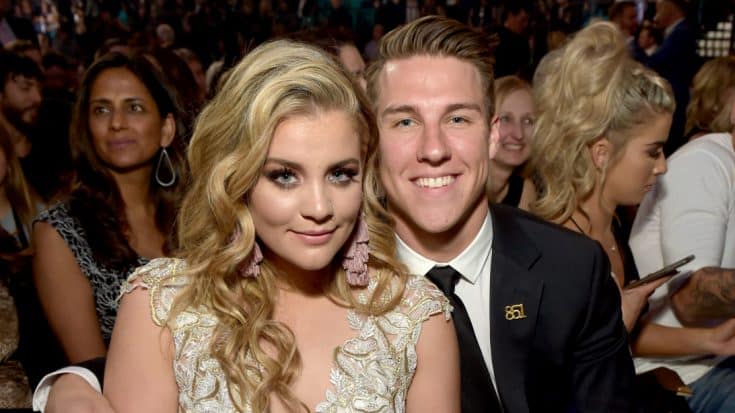 Lauren Alaina has called off her engagement to longtime boyfriend, Alex Hopkins.

The couple issued a joint statement Monday night (January 21) confirming their split, roughly six months after they announced their engagement.

Alaina captioned her statement by asking fans for “grace, compassion, and respect in this time. I don’t regret a single second with Alex. I wish him the very best. Please do the same.”

Alex elaborated a bit more in his post saying, “As badly as we wanted to make it work, and as hard as we fought to stay together, she and I just weren’t a part of each other’s perfect plan for our individual lives. And that’s ok. She and I get to focus solely on ourselves and our different futures for the first time since high school. Sometimes what we want and what God has for us is 2 totally different things. Just trust that no matter the outcome, everything works out for the betterment of your life.”

Lauren and Alex dated for six years before getting engaged in July 2018. At the time, the American Idol alum shared news of her engagement with a photo of the pair sharing a sweet kiss as she shows off her engagement ring.

Being yours forever has a nice “RING” to it. #HoppilyEverHopkins @_alex_hopkins WE ARE ENGAGED. EEEK. 💍❤️

The two weren’t shy about their love for each other and often shared photos and sweet notes on their respective social media accounts.

I wish all the girls in the world could be loved the way you have loved me in the last five years. FIVE YEARS. Here's to more laughs, cries, ups, downs, and kisses on cheeks on red carpets. You're my favorite. Forever. 10.14.12 @_alex_hopkins

I love you so much, @laurenalaina. This life we live is crazy, but I wouldn’t want to live it with anybody else. You looked so gorgeous last night. You’re a daggum rockstar and I’m so proud to call you mine! #cmaawards

In 2016, Alex appeared in Lauren’s music video for “Next Boyfriend.” The song was a comeback song of sorts for the American Idol runner-up. She earned an impressive second place finish, behind Scotty McCreery, on the reality singing competition’s tenth season in 2011. She underwent vocal chord surgery in 2014 and was unsure of how it might affect her voice. “Next Boyfriend” was her first single release following her surgery and was the lead single from her self-titled EP.