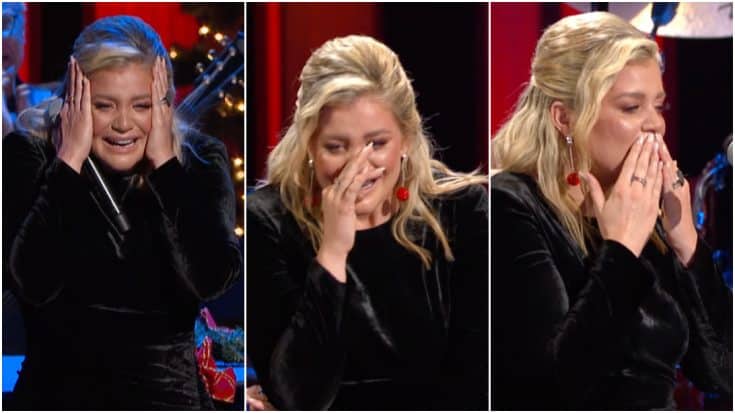 The Grand Ole Opry family is growing once again! During Saturday night’s show, Trisha Yearwood made a surprise appearance to invite Lauren Alaina to be the newest member of the Opry.

Alaina’s response to the invitation was arguably one of the most emotional in recent memory. The “Road Less Traveled” singer dropped to the floor and covered her face as she cried following the invite.

The singer struggled to catch her breath and speak through the tears, causing the Opry emcee and Trisha Yearwood to step in and give her a moment to compose herself.

The Opry invite wasn’t the only surprise in store for Alaina. The Opry made sure her parents were in the audience to witness their daughter’s special day. Lauren’s mom had already planned to be there, but her dad was under the impression that he was there for an “end-of-year wrap party to celebrate his daughter’s success in 2021.” When Trisha Yearwood told her that her dad was in the audience prior to formally inviting the singer to be an Opry member, Lauren’s tears started flowing.

Earlier this year, Alaina made her dad’s own Opry dream come true when she brought him on stage to play his banjo with her. It was a dream that both Lauren and her dad shared. According to PEOPLE, seven years ago Alaina and her manager made a list of career goals. At the top of that list was becoming an Opry member, and it was the last item left on the list to check off.  Other career goals included charting a No. 1 song, writing a book and starting an acting career.

“We kept saying we had to make a new list of goals, and I have not wanted to do it because I had not gotten this one,” Alaina told PEOPLE. “It feels good. Now, I’ve got to make some new goals. This is the best Christmas present I could ever get.”

Watch the emotional moment that Lauren Alaina got invited to join the Grand Ole Opry below.