By Miranda Raye on September 24, 2019
Advertisement 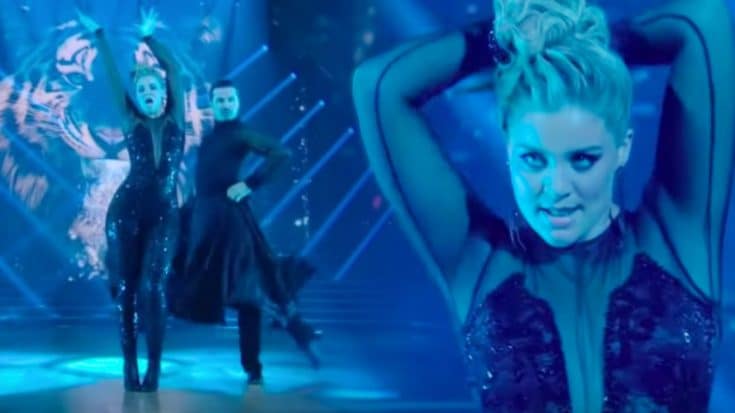 Country singer Lauren Alaina has been enjoying her time on Dancing with the Stars. After performing two dances on the 28th season of the show, Alaina sat in third place with a total score of 38.

She earned a score of 19 for her first dance, a Cha-cha-cha to Shania Twain‘s “Man! I Feel Like a Woman.”

In an interview with ET, Alaina admitted that it has been a challenge for her to embrace the “sexy” persona that is often required in some of the dances featured on DWTS:

“The first week when we met, [Gleb Savchenko] was like, ‘You’ve got to believe that you’re sexy and beautiful,’ and I was like, ‘Gleb, I was the tomboy, dorky girl, who made straight As,'” she recalled.

So when Alaina was given the paso doble to perform as her second dance, she decided to take a drastic step to help her embrace a “sexy” vibe.

In rehearsals, she asked Savchenko if they could rip off her skirt during their routine, and he agreed.

“She’s single and she was like, ‘Why don’t you rip off my skirt ‘cause I want all the guys to DM me tonight.’ I was like, ‘Sure, why not?‘” Savchenko said during the same ET interview.

So when Alaina hit the dance floor to perform her paso doble, she wasn’t shocked when her partner ripped her skirt off on live TV, but everyone else surely was!

Following the routine, Alaina commented on the whole skirt situation, saying, “I never expected a man to rip off my skirt on TV. My dad is in Alabama very surprised right now.”

When speaking to ET, she said her dad was indeed quite surprised, and had actually texted her, saying, “I’m going to have to talk to Gleb about this skirt situation!”

Alaina embraced the dance’s sexy vibe in other ways, and even went down into the splits at one point. Judge Bruno Tonioli was especially impressed, calling the dance “nasty,” but in a good way.

In the end, Alaina earned another 19 for her dance. She once again proved to be a frontrunner in the competition, and went on to place fourth overall during her season.

You can tune in to the video below to see Alaina’s paso doble. She danced to “Confident” by Demi Lovato, and she definitely looked confident in the moment!