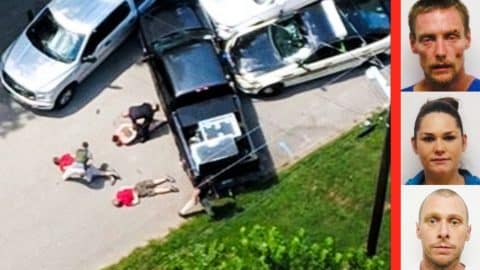 The sheriff’s office apprehended and arrested three suspects following a tip that led them to the thieves – and on a chase that ended without much incident.

The Cheatham County Sheriff’s Office arrested three people suspected of robbing a Grammy-winning country group among other folks in the Ashland City area and discovered some very high-value property when the chase ended.

Previously, country group Little Big Town called out the thieves on social media for stealing a trailer while they were on tour.

“To the guys that stole our trailer – guess you thought you were getting vintage guitars and amps,” the band wrote on their Twitter page.

According to LBT’s tweet, the trailer wasn’t filled with pricless instruments and audio equipment, but rather their children’s toys and colorful playthings!

“Instead you got two old kid bikes, 1 scooter, a baby pool and a unicorn float. Karma’s a funny thing!” the band continued in their post.

Alongside their comical reveal about the karma that was bestowed upon whoever tried to rob them of high-value items, the band shared some photos of the “loot” they had made off with.

To the guys that stole our trailer- guess you thought you were getting vintage guitars and amps. Instead you got two old kid bikes, 1 scooter, a baby pool and a unicorn float. Karma’s a funny thing. 😂😂 🦄🦄 pic.twitter.com/iDuFVcG8S8

On Monday (August 6th, 2018), sheriff Mike Breedlove said that officers discovered the thieves had not only stolen this trailer from Little Big Town, but also had taken a $70,000 boat – and they are continuing their investigation.

Law enforcement received a tip that led them to Denver Taylor at a McDonald’s restaurant nearby. He had already been a suspect in the trailer robbery and other thefts. Once investigators arrived, “the chase was on,” Breedlove said.

Eventually, Taylor and two other associates were arrested and taken into custody without much incident once the chase ended. Officials had been investigating a string of thefts they suspect Taylor had something to do with.

Additionally, more property belonging to Little Big Town appeared to be in the bed of Taylor’s pickup, Breedlove told The Tennessean.

A DAY OF CHEATHAM GOOD WINNING OVER RUTHLESS EVILCheatham, Davidson and Robertson counties have been on the hunt for…

Watch Little Big Town talk to 99.5 QYK about their stolen trailer in the video below.