Lightning Strikes Behind Air Force One – Moment Captured In Photo

By Miranda Raye on September 10, 2019
Advertisement 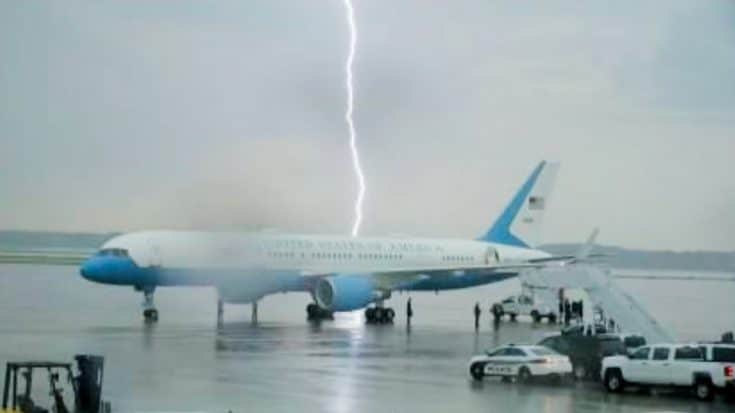 Depending on who you are, lightning can either be terrifying or fascinating.

It’s easy to understand why some people fear the bolts of light that strike from the sky. According to the National Weather Service, lightning kills an average of 49 people in the U.S. each year. Many others survive being struck by lightning, but suffer lifelong damages as a result.

Lightning storms are also despised since they can interfere with air travel. This is something that President Donald Trump experienced on Monday (September 9) as he was attempting to travel for a scheduled tour of Hurricane Dorian damage.

However, President Trump was forced to cancel his tour because of thunderstorms in North Carolina. Not long after Air Force One arrived at the Marine Corps Air Station Cherry Point near Havelock, a large lighting bolt struck behind the plane.

According to CNN’s Steve Brusk, a “pool crew” at the Air Station happened to capture a picture showing the exact moment that the lightning struck behind Air Force One. He credited the photo to crew members Orly Ruiz, Michael Wade Sanders, and Liz Turrell.

Pres. Trump had to cancel his planned tour of Hurricane Dorian damage because of thunderstorms in Fayetteville, NC. This was a lightning strike behind Air Force One shortly after he arrived. (The shot from the very wet pool crew of Orly Ruiz, Michael Wade Sanders and Liz Turrell) pic.twitter.com/9MWUyZ2WJj

Brusk later tweeted an update saying that Air Force One was able to leave the Air Station and that President Trump was on his way to Fayetteville, where he was hosting a campaign rally.

As he departed for Fayetteville, President Trump shared the same photo on his own Twitter. He made it clear that he found the photo to be beautiful, writing that the sight was “amazing” to see.

President Trump arrived safely in Fayetteville for the rally that took place later in the day.

Hats off to the Air Station pool crew that took this fantastic photo. Since lightning only lasts for a short while, they had to act fact to capture the picture!

Want to learn more about lightning? Tune in to the video below to hear some facts you may not have known before.