By Miranda Raye on August 7, 2018
Advertisement 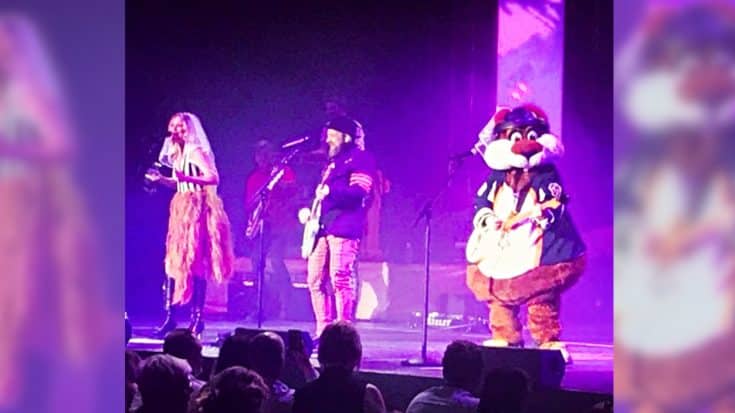 Tour pranks are pretty common practice in country music these days. Typically, these pranks are orchestrated by the headlining artist’s opening acts, who usually opt to save their prank for the final show of the tour.

The encore gives Ell the chance to show off her rockin’ guitar skills, since she is currently one of the most highly respected guitarists in country music.

Having so much fun on the @sugarland tour…and let’s just say things get a little #crazy. See you Thurs, Nashville! ✌? #letsgocrazy

During a recent show in Greenville, South Carolina, Ell saw the encore as the perfect time to pull a prank on Jennifer Nettles and Kristian Bush. For those who don’t know, Greenville is home to the professional ice hockey team the Greenville Swamp Rabbits. Prior to Sugarland’s show, one member of the crew happened to have the suit of the team’s mascot, Stomper, and was wearing it around backstage.

That prompted a whole bunch of jokes from the people on tour, which inspired Ell to get into the suit herself. Even though it was stinky and hot, Ell stuffed herself into the suit so she could orchestrate an epic prank.

During the encore, Ell strolled out on stage in the Stomper suit with her guitar, and Nettles and Bush lost it. We’re sure they were wondering who in the world was inside that random rabbit suit!

Despite being taken aback by Ell’s tour prank, Sugarland finished out the encore with Ell remaining in the Stomper suit the whole time. At the end of it all, someone snapped an epic picture of Ell in the suit, which Bush said needed to be posted online right away.

It’s hard to run and play guitar as a #SwampRabbit….but I gave it my best last night. To watch video….Link. In. Bio. ? Surprise, @sugarland! #random #tour #prank @swamprabbits

It’s going to be hard for Ell to live up to herself if she plans to prank Sugarland again before the end of the tour. We don’t know if any prank could get them as good as her Swamp Rabbit appearance!

If you’d like to laugh along with Sugarland you can check out the behind-the-scenes video Ell shared of her prank. It shows the planning process, the prank itself, and the aftermath when everyone got backstage and let the laughter rip loose.

That suit may have been hot and smelly, but we feel like Nettles and Bush’s reactions to seeing Ell in it for the first time were worth it!