Line Dancers Deal Out Routine To Kenny Rogers’ ‘The Gambler’ 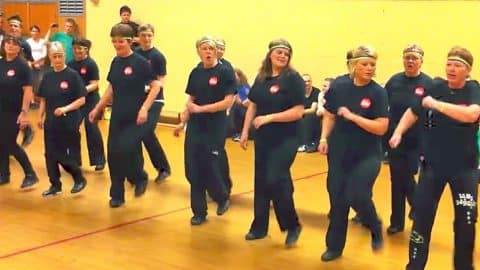 The History Behind Kenny’s Signature Song

Despite its somewhat sad story, Kenny Rogers‘ “The Gambler” is a fun song to listen to. It’s as catchy as can be, which is likely part of the reason why it became such a bit hit.

Few people know this, but Rogers wasn’t the first artist to record “The Gambler.” It was originally picked up by Bobby Bare, but the recording failed to chart.

As a result, songwriter Don Schlitz decided to record the song himself. Although his version charted, it never climbed any higher than the 65th spot.

After that, “The Gambler” was picked up by a few other artists, including Johnny Cash.

But Rogers was the one who finally experienced chart success with the song. He took “The Gambler” to the top spot on the Hot Country Songs chart and shuffled it all the way to the 16th position on the Billboard Hot 100.

Over time, “The Gambler” earned the reputation as Rogers’ signature song. It is so synonymous with his name that his fans have even taken to calling him “The Gambler.”

Dealing Out A Dance

Because of its catchy beat and repetitive chorus, “The Gambler” makes the perfect backing track for a dance routine. This is something that one line dance team realized, and they choreographed an elaborate routine to match Rogers’ iconic song.

A video of the routine shows a small group dealing out the initial steps. More people joined in once the pace picked up, and before long over a dozen people had taken over the dance floor.

The group’s routine was as snazzy as could be, with spunky steps galore. They never seemed to slow things down, as the routine featured one kick, spin, and stomp after the next.

There’s another big factor that made this line dance one of the most well-executed that we have ever seen. The group shifted shapes multiple times throughout the routine, moving from a tight block, to lines, to a circle formation, and more. They managed to do all of that without missing a step, which makes it all the more impressive.

Tune in below to watch this entertaining line dance routine to “The Gambler.” We desperately want to learn the steps so we can do this ourselves!