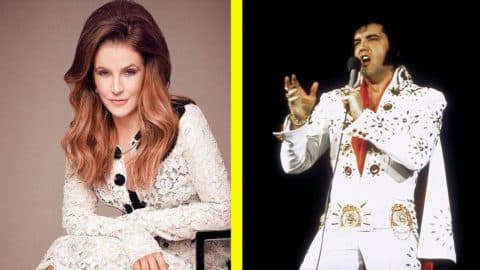 There are several things about Elvis Presley that stood out. The King was known for his hair, his antics on stage, and his wild outfits that often included scarves. During his concerts and shows, he would regularly throw his scarf into the audience. In addition to these scarves that lucky fans would receive, Presley had his own personal collection that he kept to himself.

While most Elvis fans know that he gifted these scarves during his performance some might be unaware that Queen singer Freddie Mercury was gifted one by The King’s daughter. Lisa Marie revealed this information in an unearthed interview with New York Times best-selling writer and Elvis book author Ken Sharp.

When Lisa Marie was about 10 or 11 years old, she lived with her mother Priscilla in Los Angeles, California. This would have been around two years after Elvis’ death in 1977. Lisa Marie remembers the first rock concert she had ever been to was Queen at The Forum in Inglewood, California.

Lisa Marie recalled during the interview,

“I remember bringing Freddie Mercury a scarf of my Dad’s and I gave it to him after the show. I loved it. I loved the theatrics. I loved Freddie. I thought Queen were awesome.”

Freddie was admittedly a big Elvis fan. So much so that his song “Crazy Little Thing Called Love” on Queen’s 1980 album, The Game is his tribute to Elvis.

Watch the video below of Queen’s 1985 performance of “Crazy Little Thing Called Love.”