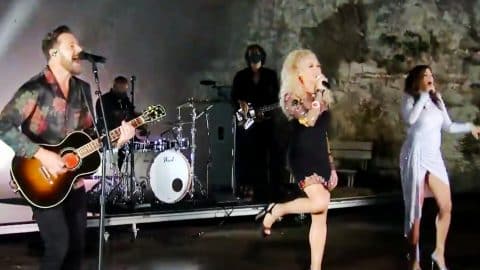 The group known for their chart-topping boozy song “Day Drinking” is back at it again with another alcohol-themed hit and this time they’ve taken it straight to the stage of the 2020 CMT Music Awards!

Nominated for both Video of the Year and Group Video of the Year, Little Big Town was one of the most-anticipated performers for this rescheduled event – and boy did they hit the nail on the head.

The foursome received nominations for both their “Sugar Coat” video starring Kate Bosworth and their video for “Wine, Beer, and Whiskey.” Unfortunately, they didn’t take home any awards but if their performance is any clue – they had a ton of fun!

Tonight’s show marked their 10th year of being nominated at the CMT Music Awards and their 19th total nomination. They most recently won back-to-back Group Video of the Year awards in 2017 and 2018 for “Better Man” and “When Someone Stops Loving You”, respectively.

Check out Little Big Town’s fun-filled performance of “Wine, Beer, and Whiskey” from tonight’s CMT Music Awards below and let us know what you think in the comments.

Bottoms up! Let’s raise a glass to @littlebigtown for their incredible performance of "Wine, Beer And Whiskey" at the 2020 #CMTAwards 🍷 pic.twitter.com/JFlmLUdoRR