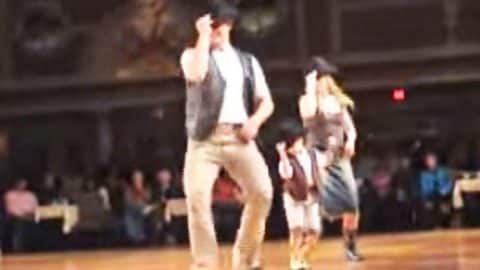 Young Boy Shows Us All How Dancing Is Done

Anyone who’s heard Gretchen Wilson‘s “Redneck Woman” knows that it is one fun song to dance to. There’s something about its upbeat tempo and rowdy lyrics that prompt country fans of all ages to jump out of their chairs and hit the dance floor.

Back in 2009, one trio of talented line dancers showed off their insane talents while dancing along to “Redneck Woman.” You could hear the crowd’s excited chattering and applause as the dancers took to the stage, because one of them was just a little boy!

No one had any idea what to expect as the tiny cowboy took his place between the other two dancers. But once the music kicked off, the crowd got to witness something they’re sure to never forget.

Even though he was only a child, the young boy had absolutely no trouble keeping up with the other dancers.

He didn’t cut any corners, executing the moves with just as much precision and enthusiasm as his grown-up dancing partners. This dance was no walk in the park!

The three dancers utilized their cowboy hat, adding an extra flair to their dance. The choreography also consisted of quick kicks and turns, which sent the three dancers flying across the stage.

Through it all, the little boy’s smile never seemed to disappear off of his face. It’s clear that he was having the time of his life dancing out there!

You could hear the crowd’s excited cheers at various points during the routine, as the little boy pulled off one complicated move after another.

We hope this little cowboy has kept dancing in the years that have passed since this video was filmed. He has undeniable talent!

It’s obvious this young fella’s favorite song to line dance to is “Redneck Woman.” What’s yours? We sure have a “Good Time” dancing along to one of Alan Jackson’s famous songs!