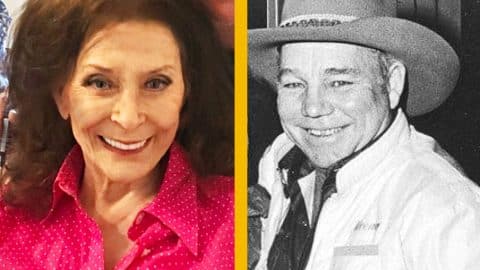 Loretta Lynn shared a remembrance post for her late husband on what would have been their 73rd wedding anniversary.

Loretta married Oliver Lynn, also known as “Doo” or “Mooney,” when she was just fifteen years old. Oliver bought Loretta her first guitar in 1953 and urged his wife to begin performing.

Despite the love between the couple, Loretta’s marriage to Oliver also inspired some of her most honest, heartbreaking songs. In a candid interview with the New York Times, Loretta admitted that the couple sometimes physically fought. In the interview, Loretta explained:

“Doo had told me he was going to take me somewhere on Saturday night. I had my hair all pin-curled up, and he came in, and he was drinking. And I knew he wasn’t going to take me nowhere. I set Ernest Ray down on the floor. And I started walking away from Doo, and he got me by one of my pin curls. I still had Cissy in my arms ’cause she was just a little tiny thing.”

In response, Loretta threw a punch that accidentally knocked out three of Oliver’s teeth. Loretta stated:

“And I came around with my fist to hit him on the shoulder, but I hit him in the mouth and knocked three teeth out. There was a hardwood floor, and, I’m telling you, the teeth broke into tiny little pieces and it seemed like they just kept falling. Click-clack-clack-clack. I thought: ‘I’m dead. I am dead. I am completely dead.’ But you know, he never said a word.”

Loretta admits that the couple “fought hard,” but the pair obviously loved even harder. Loretta and Oliver were married for 46 years until Oliver died in 1996 of emphysema. The couple welcomed six children together.

“Today would be our 73rd wedding anniversary,” Loretta wrote on Facebook. “I can’t believe it’s been that long. We fought hard and we loved hard. He was my biggest fan and the real force behind my entire career. He’s the only man I ever loved and I miss him every single day. I love you, Doo.”

For more on Loretta’s relationship with Oliver, check out the video below.