By Miranda Raye on February 16, 2021
Advertisement 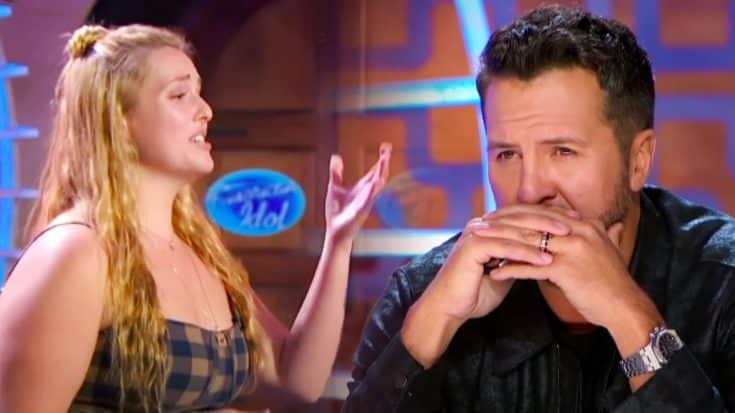 A new season of American Idol kicked off on Valentine’s Day in 2021.

Leading up to the premiere of the new season, we knew that one singer would tug on judge Luke Bryan‘s heartstrings. In a preview, he said one audition made him cry…which is the first time that’s happened since he started judging Idol in 2018.

“This season is the first time someone has made me cry by just singing,” he said.

This season is the first time someone has made me cry by just singing. See y'all this Valentine's Day on @ABCNetwork at 8/7c. #AmericanIdol pic.twitter.com/q131ktUob3

Viewers didn’t have to wait long to see who that someone was. The audition that garnered such an emotional reaction from Bryan aired during the first episode of the season.

It was 20-year-old Grace Kinstler who got Bryan to tear up when she performed.

Before she sang, Kinstler shared that she unexpectedly lost her father the previous February. She said he was the biggest supporter of her music career, so she dedicated her audition to him.

She started off singing the song “Midnight Train to Georgia,” which was recorded by Gladys Knight & the Pips. Its songwriter, Jim Weatherly, just passed away a few days before the audition aired.

All of the judges were visibly impressed with Kinstler’s powerhouse performance. Katy Perry‘s jaw literally dropped as she stared at Kinstler in awe.

From there, Kinstler moved in to her second song, which was Aretha Franklin‘s “Natural Woman.” Perry encouraged Kinstler to sing it “like the legend [she wants] to be,” and that’s exactly what she did.

As impressed as Bryan and the other judges were with Kinstler’s rendition of “Midnight Train to Georgia,” it was her “Natural Woman” cover that made the greatest impact.

When the cameras cut to Bryan, his eyes were full of tears. He wasn’t the only one crying, because Perry was also teary-eyed.

“You know I get brought to tears by stories, backgrounds of what people have been through and their struggles. But this is the first time in four years that just someone’s singing made me cry,” Bryan said at the end of the audition.

Then he paid Kinstler the highest of compliments, saying:

“Just understand that your dad is very, very proud of you right now. And what a lot to be proud of.“

He also said her audition was right up there with Kelly Clarkson‘s and Jennifer Hudson‘s…both Idol alums who have gone on to become superstars.

Perry and Lionel Richie agreed with Bryan’s assessment, and they gave Kinstler a golden ticket to Hollywood.

Tune in to the video below to watch her outstanding audition and see why Bryan was so touched by her voice. It’s clear this girl is going to go far!