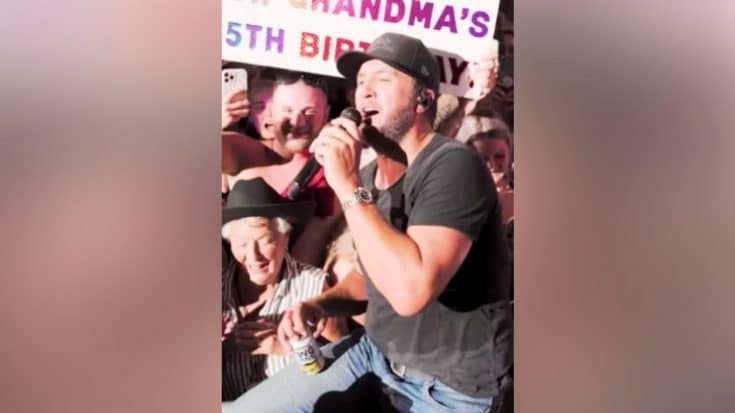 It can be a ton of fun to celebrate your birthday at a concert…especially a Luke Bryan concert!

During one recent show, Bryan noticed a sign in the crowd about someone’s birthday. It said, “Luke, strip it down for grandma’s 85th birthday?”

Before you freak out…the sign wasn’t asking Bryan to put on *that* kind of show! It was asking him to sing his sultry single from 2015, which is titled “Strip It Down.”

Bryan knew he couldn’t deny the 85-year-old birthday girl’s request. So he found her in the crowd, and began to serenade her with “Strip It Down.”

Everyone in the crowd cheered, went wild, and sang “Strip It Down” along with Bryan. The moment was captured on video, and Bryan shared the clip on social media.

The grandma was holding a can of Bryan’s Two Lane beer in her hand. So when Bryan shared the video of his serenade, he captioned it, “@twolanebrewing is for anyone above the age of 21. Including grandma.”

You can watch Bryan serenade the 85-year-old birthday girl below. That was so cool of him to do!