By Miranda Raye on December 13, 2019
Advertisement 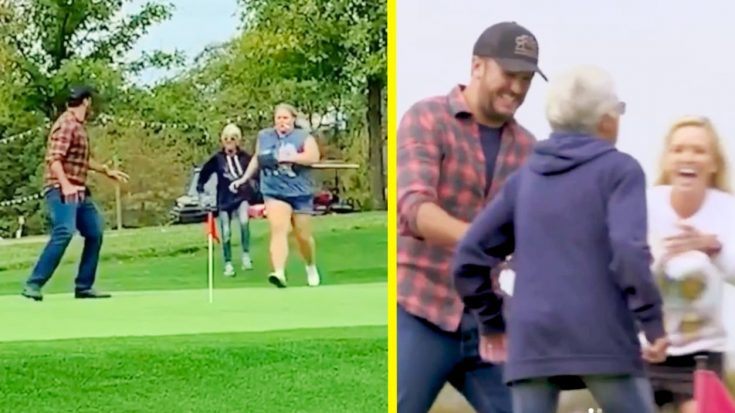 In 2018, Luke Bryan and his wife, Caroline, teased each other, their family members, and friends during an event they dubbed “Pranksmas.” During Pranksmas, the Bryans tried to one-up each other by pulling the best pranks in the days leading up to Christmas.

But one of the funniest pranks occurred when Caroline scared Luke’s mama, LeClaire. And she got her not once, but twice!

LeClarie had some choice words to say after being scared by her daughter-in-law’s prank.

Since Pranksmas was such a hit in 2018, the Bryans decided to go all-out for 2019. And their first target was none other than LeClarie.

Luke and Caroline enlisted a little help to prank LeClaire on the first day of Pranksmas in 2019. They got actress Chelcie Lynn to play the part of a crazed Luke fan named “Trashy Tammy,” and had former Vine star/comedian Officer Daniels step in to play a cop.

The whole thing was filmed by Michael Monaco, who captured every hilarious moment.

At first, you see Luke and LeClarie standing on a golf course while discussing their plans for the day. Then, Luke turns around in horror, telling his mom, “Mama, that’s that girl.”

That’s when “Trashy Tammy” started chasing Luke as he ran away.

Tammy managed to pin Luke down, and started talking about how much she wanted to hug him. LeClaire was distraught, and threw her cigarette away as she stepped in to try and protect her son.

That’s when Officer Daniels ran in to assist, making the prank all the more believable.

Caroline also got involved, storming out in anger as she appeared to be protecting her husband. LeClaire met up with her at one point, and tried to hold her back in an attempt to keep her safe.

Luke and Caroline didn’t let the prank go on for much longer after that. Turning to his mama, Luke said, “Mama, twelve days of Pranksmas.”

She fell to the ground after that, realizing she had been fooled big time!

You can watch the whole prank unfold in the video below. Swipe through the slideshow to see a behind-the-scenes clip Caroline filmed that shows them getting ready to pull off the prank.

Caroline said she doesn’t think they’ll ever be able to top this prank they pulled on LeClaire, and we have a feeling she’s right!