Luke Combs & Eric Church Sing Together On #1 Song, “Does To Me”

By Miranda Raye on November 8, 2019
Advertisement 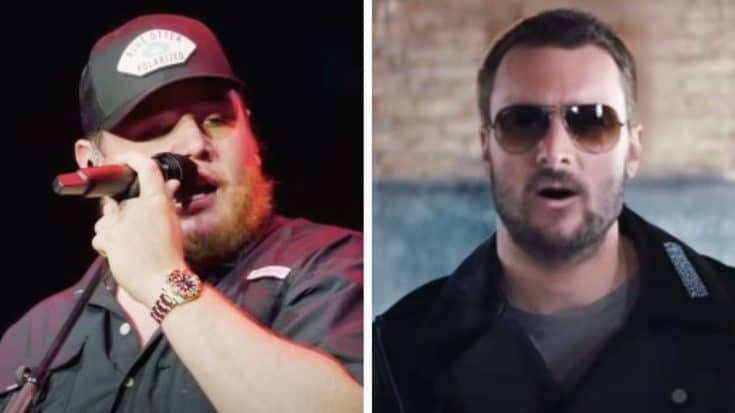 On November 8, 2019, Luke Combs‘ highly anticipated sophomore album was finally released. Titled What You See Is What You Get, the record contains the hit singles “Beer Never Broke My Heart” and “Even Though I’m Leaving.”

The album also includes a collaboration with country legends Brooks & Dunn on a song titled “1, 2 Many.”

But “1, 2 Many” isn’t the only collaborative track on the record. Another song, titled “Does to Me,” features Eric Church.

The song had fans buzzing before they even knew its title. On October 3, 2019, Combs teased the album tracklist, sharing only the names of the songs he had already released.

But the new bit of information he gave away was the fact that Church recorded track #13 with him. “How about that feat. on track 13…” Combs wrote on Instagram.

Eventually, fans learned their collaboration was named “Does to Me,” but still had to wait a month before they got the chance to hear it.

“Does to Me” was finally released when What You See Is What You Get dropped on November 8, 2019. It was released as a single in February 2020, and eventually went on to top the U.S Country Airplay chart. In doing so, it became the eighth consecutive #1 song of Combs’ career.

The song has a nostalgic feeling, as Combs looks back on various moments throughout his life. He recognizes that such moments may not mean anything to the people he’s sharing them with, but in the end, they still matter to him.

As he sings at one point:

“I was the first man standing next to my best friend, the day the love of his life said ‘I do’ to him. I was a couple beers deep, but I still remembered that speech. And that might not mean much to you, but it does to me.”

Church finally jumps in on the third verse, sharing a few memories of his own. He name-drops Don Williams in his verse, and sings about his mama’s Bible.

Go ahead and watch the official music video for “Does to Me” below. Let us know what you think of the song when you finish!

After hearing this, we’re itching to have Combs and Church collaborate again.