By Jennifer Pernicano on June 18, 2019
Advertisement 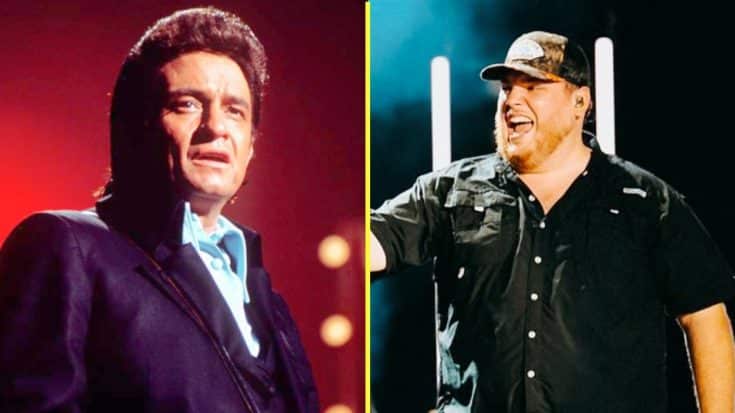 60 years ago, Johnny Cash became the very first artist to have five songs in the Top 25 on Billboard‘s Hot Country Songs chart at the same time. The week of May 25, 1959 was the first week Cash achieved this feat, one that he replicated for two more weeks.

The five songs that were in the Top 25 simultaneously were the following:

For the past 60 years, no artist has ever come close to achieving this incredible feat…until now.

Just a few days after he was invited to be a member of the Grand Ole Opry, Luke Combs has officially done something no one else but Johnny Cash has done. Combs recently released a five-track EP titled The Prequel, and all five tracks are currently in the Top 25 on Billboard‘s Hot Country Songs chart.

The chart is for the week of June 22, and is as follows:

Combs has had an incredible few weeks with the release of his EP, the Grand Ole Opry invitation, his big CMT Awards win, and now this! Congratulations, Luke on this well-deserved honor!

Watch Chris Janson, John Conlee, and Craig Morgan invite Combs to be a member of the Opry below.

Luke Combs invited to be a Grand Ole Opry Member

This is the absolute feather in my cap for me as far as career goals. It is the absolute No. 1 thing for me. It cannot be surpassed. It’s something I’ve dreamed about since I made my debut. It’s such a storied thing. I was like, “I will do whatever it takes to become a member of the Grand Ole Opry.” I just can’t believe it. It doesn’t feel real. When I saw Craig Morgan, Chris Janson and John Conlee walk out, I thought, “This is how they invite people to become a member, but I don’t deserve that yet.” I believed them when they said they were coming out to sing with me. You just never think this is going to happen. When they asked, I literally couldn’t believe it. I didn’t even know what to say. There’s nothing to say but yes, and I didn’t even say yes. I just cried the whole time. Let me go on the record and say, “Yes.” I don't know what else to say to the Grand Ole Opry except "thank you." I’m so humbled by this opportunity.