By Miranda Raye on February 5, 2019
Advertisement 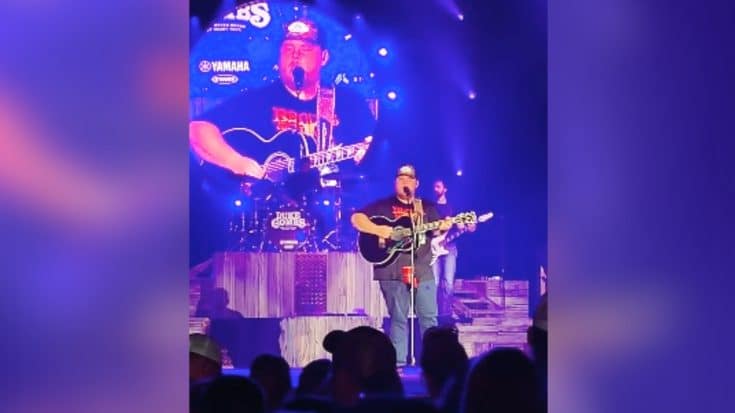 In the music world, we often refer to popular artists as being “hot” in their respective genres. But in the case of country star Luke Combs, he’s more than “hot”… he’s on fire!

Hard to believe it, but the four-time Country Airplay chart-topping artist just released his debut album in 2017. Since then, he’s become a force to be reckoned with.

In less than two years after his debut album’s release, Combs can already call himself a CMA Award winner and a Grammy nominee. Now is that impressive, or what?

Fans have thrown their support behind Combs, and it shows in chart data and ticket sales. His four singles have all topped the Country Airplay chart and have already been certified Platinum or higher by the RIAA.

His fifth single, “Beautiful Crazy,” is poised to become another number one.

The song already helped Combs achieve a major Country Airplay chart feat. It entered the chart’s Top 10 while his previous single, “She Got the Best of Me” was still in the ranking. In doing so, Combs became the first artist since 2000 to have two solo singles featured in the chart’s Top 10 at the same time (Tim McGraw was the last artist to achieve this milestone).

“Beautiful Crazy” has been a remarkable song for Combs, as it was making waves months before it ever became a single. The song had been a longtime fan-favorite, but it went unreleased until Combs included it as a bonus track on the deluxe edition of his album, This One’s For You Too.

Long before that, Combs had a video up on his official YouTube channel that showed him performing “Beautiful Crazy.” Even though it was an unreleased song, the video generated millions of views.

In fact, it has been watched more times than the official music videos for his singles “She Got the Best of Me” and “One Number Away.”

“Beautiful Crazy” serves as proof that Combs’ fans enjoy his unreleased music just as much as the singles he sends to radio. That’s why he often brings up some unreleased tracks during his concerts, which is exactly what he did during a sold-out show in West Virginia.

Combs treated the crowd to a performance of a song titled “Reasons.” While the track has not been released, it isn’t entirely new, as Combs has performed it at past shows.

One popular video of Combs singing “Reasons” dates all the way back to October 2018.

It soon became obvious that “Reasons” was a crowd favorite, which stands to reason why Combs chose to sing it at his West Virginia show in early 2019. Once again, he received an outstanding reaction.

Videos from the concert show the audience listening intently as they try to pick up every word of the unreleased song. All eyes and ears in that room were fixed on Combs, wanting to absorb the new track he was presenting to them.

It was only after Combs wrapped up the song that the crowd ripped loose, issuing a series of excited cheers that proved they were pleased with what they heard.

You’re sure to be pleased as well when you watch Combs’ live performance of the unreleased “Reasons” below. Based on the crowd’s response, we wouldn’t be surprised if we saw this song on a future album of his!