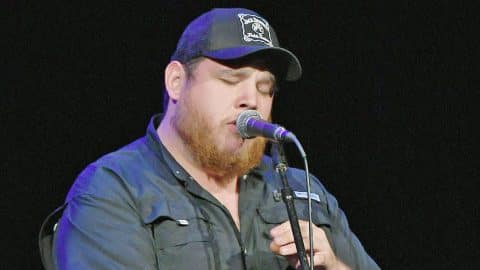 Everyone has been there before. Heartbreak is one of the toughest things to go through, especially when you are a teenager. For some people, like country singer Luke Combs, he has the ability to write down his feelings so eloquently into a song.

Luckily for us, he did just that about his very first heartbreak at 17 years old. He put these feelings into his single called “She Got The Best Of Me,” which is one of five bonus tracks on the deluxe edition of his debut album, titled This One’s For You Too. He wrote the single with Channing Wilson and Rob Snyder, and recently shared the screenshots of the texts between them day they wrote it.

4 years ago when I was still living in Boone, NC, I came to Nashville with a buddy of mine and we went to Revival at Tin Roof, which was run by Channing Wilson & Rob Snyder. My buddy was scheduled to write with Channing & Rob but couldn't make it, so he passed my number along to Channing and we wrote a song together that day called “She Got the Best of Me." I'm excited to announce it will be my next single at country radio – Channing & Rob's 1st single. Congrats fellas! Proud to call yall friends.

This One’s For You is responsible for five number one singles, “Hurricane,” “When It Rains It Pours, ” One Number Away,” “She Got The Best Of Me,” and “Beautiful Crazy.”

Combs passionately sang the heartbreaking lyrics for GMA‘s live audience and the hundreds more watching from home. There is no denying his talent as a singer, songwriter, or performer, especially after this incredible performance.

When @lukecombs just comes on and just kills it 👊🏼 some "She's Got The Best Of Me." pic.twitter.com/sK5uIlZPM2

Since the live TV debut, “She’s Got The Best of Me” went number one on the charts and sold over a million copies. We’d say it was a success!