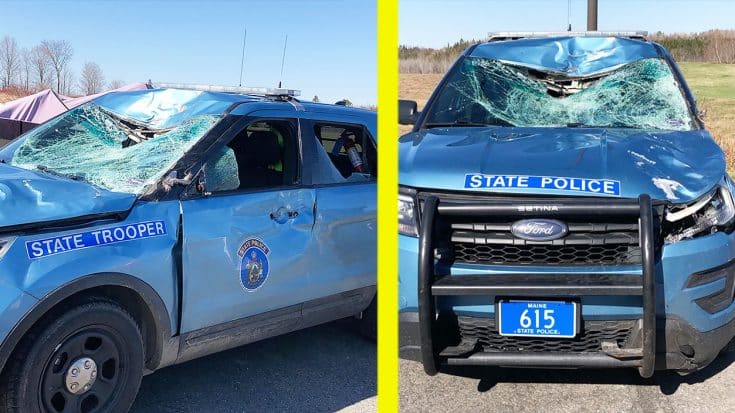 According to a post on the Maine State Police Facebook page, a trooper struck a moose in Island Falls on Wednesday evening. Fortunately, the officer suffered minor injuries, but his vehicle was totaled upon impact.

Trooper Noah Castonguay was responding to a call in the Aroostook County town when a moose walked onto Interstate 95. Castonguay was unable to stop or avoid the animal which led to the accident. The collision demolished the cruiser’s front end, shattered the windshield, and also smashed the roof and driver’s side.

Troop F – Tr. Castonguay was responding to a call last night when a moose entered the roadway in front of him on the…

Posted by Maine State Police – Headquarters on Thursday, May 14, 2020

Moose are massive animals, that weigh anywhere from 800 to 1,300 pounds and can stand over 6 feet tall at the shoulder. With their tall legs, it can be almost impossible to see the rest of the moose’s body while driving at night. When the front of a vehicle strikes a moose, it usually impacts its long legs first, thus sending the bulk of the animal to collide into the windshield and roof.

With spring bringing in warmer weather, road collisions with animals are on the rise. Police say that drivers need to be extra cautious and look for moose, deer and other animals as they can be rather difficult to see and are very unpredictable.

Watch the video below to see another driver encounter a giant moose while driving down the highway.