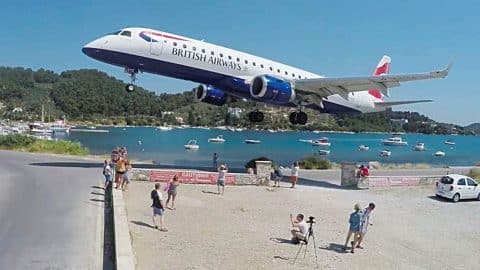 Hair-rising footage was captured at the Skiathos Airport in Greece on July 12th, 2019 as a British Airways airliner came down to land near a popular tourist spot.

Filming The Plane As It Passes

The reason why this spot is popular is because the airport is so close to the ocean, people can literally stand right under the flight path as massive planes land. Thrill-seeking tourists often ignore the “danger please keep away from aircraft blast” signs and stand so close it looks like a landing plane would hit them.

In this video though, you see the plane in the distance coming in for a landing as people patiently wait, standing on a concrete ledge. The plane comes in so fast and loud many people scatter before it gets to them. Others duck while still trying to film the landing plane as it passes.

The Plane Roars Over The Onlookers

Everyone gets hit with a massive blast of wind as the plane roars over the onlookers and kicks up dust and debris. It may be super cool to some people, but others find it very scary. One person left their thoughts about it in the YouTube comments saying:

“I don’t know why people think this is some kind of game or something to be played with. All it takes is one tragedy….” the YouTube user said.

The runway is only 5,341 feet long and it’s so short that many planes have to take off with very low fuel so the plane is light enough to get airborne, often landing at the Thessaloniki airport that’s close by to refuel their tanks.

Watch the full video of the plane landing below.