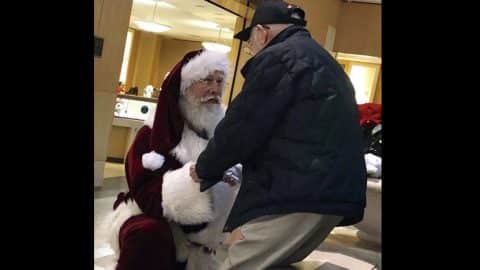 If you don’t believe in Santa, you just might after hearing this touching story that is taking the internet by storm.

For most Santas, their job is a seasonal one. Roughly one month out of the year, kind-hearted men full of Christmas spirit dress up as jolly old St. Nick and take their places at department stores, malls, parades and other holiday events. They pose for photos and listen to dreams of starry-eyed children all over the world. But, for most their red suits are packed up on December 26th and don’t reappear until the next year.

But, one Santa Claus from Wilmington, Delaware, was caught in a candid moment that has us all believing that Santa is indeed real. Shopper Gina Wilbur found a seat on a bench at the Concord Mall in Wilmington as she took a break from her holiday errands. Moments later she saw Santa walking her way. She took out her phone to snap a picture of St. Nick and was taken by surprise as the man in red stopped in front of an elderly gentleman near her. As the gentleman stood, Santa knelt down.

The man Santa took a knee for was Bob Smiley, a veteran of Patton’s army. Santa had spotted Smiley and left his post at Santa’s Workshop to take the opportunity to thank the veteran for his service. The beautiful moment was captured by Wilbur and has been seen by millions.

“Christmas shopping with Cavan and took a second to sit on a bench near Santa’s workshop… then Santa steps away from his Chair… he walks over to a veteran sitting on the wall… as Santa approaches, the veteran stands and Santa takes a knee,” Wilbur captioned the photo. “I hear Santa telling the gentleman, in a soft voice, of others he knew who served. He shakes his hand with genuine gratefulness thanking him for his service and returns to the children. Best moment of my day.”

Santa, the veteran and the photographer were reunited on a local news broadcast where Santa explained the motive behind his kind gesture.

“We owe a debt of gratitude to men like this that have made such a life-changing decision…to give up themselves, be willing to lay down their life for other people,” Santa said.

Smiley humbly responded, “In my generation, it was duty. We all went. We all served. Every boy in my high school graduating class served. Out of 35 boys….5 were killed. They were my friends for 13 years of my life.”

When asked how it makes him feel when people recognize him for his service, Smiley replied, “I appreciate it and I try to show my appreciation when they do thank me. I thank them for thinking about us.”