Mama Bear Struggles To Get 4 Cubs To Cross The Street

By Jennifer Pernicano on March 30, 2021
Advertisement 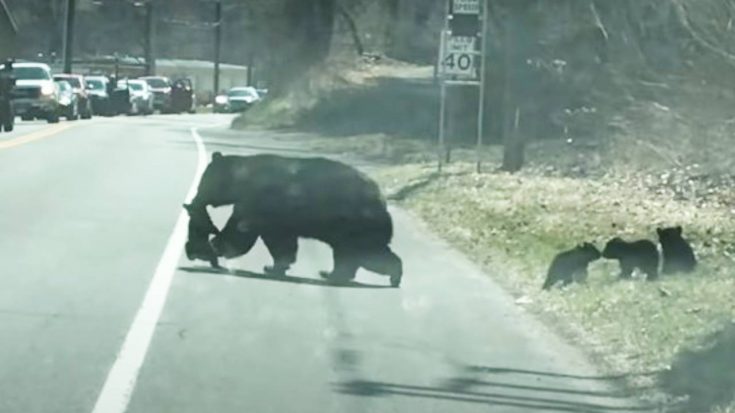 On March 27, 2021 Robin Covelli of Torrington, Connecticut was held up on a two-lane road due to five bears and she decided to film what she saw: a mama bear trying to cross the street with her four cubs.

“I was very lucky to witness this today. This poor mama bear tried for 15-20 minutes to get her 4 (yes 4) cubs across the street,” she wrote. “As you can see they were not very cooperative, but oh, so adorable! I’m sure many of you moms out there can so relate!”

The mama’s first attempt that we saw was to grab one cub in her mouth and carry him across the street. Another cub happily followed her. She went into the shrubbery to set the cub down and the third cub made their way across the street.

The last cub left on the side of the road began climbing up a pole, so the mama went to go get him, but one of the other cubs followed her back! These two began to try to run back to where they started and the mama can be seen trying to figure out which cub to pick up in her mouth!

She finally got those two into the shrubs, but then the other two ran back into the street! She was able to run back and grab one, and the other followed. Phew!

“She got them all across, finally!” Covelli said in the video.

The video has resonated with so many people – it already has over 1 million shares and over 500,000 comments. One person hysterically called it “bearenting” instead of parenting.

How many of y’all can relate to this?! Watch the full video below.