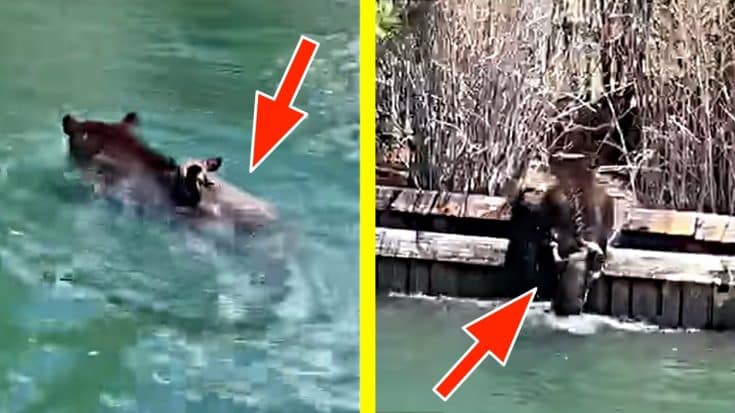 A mama bear in South Lake Tahoe, California is receiving praise for rescuing her three little bear cubs all on her own.

The South Lake Tahoe Firefighters were called to the scene when bystanders noticed that the three bear cubs were separated from their mom at a local marina.

When the firefighters got to the marina, they quickly realized that the mama bear had it all under control and she didn’t need help rescuing the cubs help after all. The mama bear had devised a plan to rescue and reunite with her cubs all on her own.

She swam over to each cub individually and slowly encouraged them to jump into the water with her. Once the cubs jumped in, they climbed up on her back and held on tight while she swam back across to the other side of the land. Once she reached land, the mama bear pulled herself up and onto dry land where it was safe, while the cub hung on super tight so it wouldn’t lose its grip and fall back into the water. One by one she went back and forth to get her cubs and bring them to safety.

In a Facebook post, the South Lake Tahoe Fire Fighters Association shared, “The mother bear was determined to save all three of her cubs herself and ensure that they see tomorrow by continually swimming each one to safety!”

What a heartwarming and impressive display of natural instincts and motherhood!

Mama bears are heroes too!

With Mother’s Day quickly approaching, we feel like sharing a story of a mother bear and her three cubs that have come out into the community today and ended up in the keys marina. The mother bear was determined to save all three of her cubs herself and ensure that they see tomorrow by continually swimming each one to safety! Firefighters were called to the scene for a separated cub that the mother was able to coax into the water and swim it to safety.